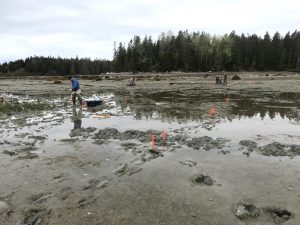 Setting up the field site in Gouldsboro.

The results of studies investigating the effectiveness of a popular technique used by towns in the hopes that it will increase clam harvests was published in the December 2020 issue of Journal of Shellfish Research. The investigation determined that brushing is not an effective method for increasing clam populations because the brush also provides habitat for predators.

This was the first scientific assessment of brushing, and was composed of identical field experiments deployed on flats in all three regions of the Maine coast: Harpswell (southern), Bremen (midcoast), and Gouldsboro (downeast). DEI scientists collaborated with municipal officials and clammers to conduct the research. 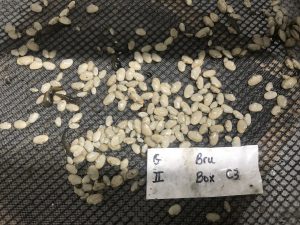 Contents of a recruitment box from a control plot near a brushed plot in Gouldsboro.

The research showed that juvenile clams that settle in or near the brushed areas are devoured by predators which use the brush as habitat. Predators, especially invasive green crabs, thrive in the Gulf of Maine’s warming seawater, resulting in high rates of predation on clams. Brushing may have been effective in the past when seawater temperatures were cooler, but most areas of the intertidal will likely receive no benefit from using the technique in today’s warmer waters.

These findings provide valuable information to shellfish managers about tools they can use to sustain and enhance clam harvests in the changing marine ecosystem. 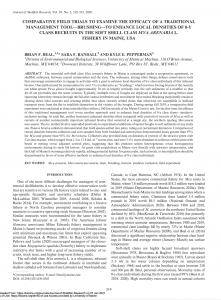 ead more about the study here.