Rockweeds dominate much of the New England and Canadian Maritime coasts and serve as food and habitat for numerous species. Cobscook Bay is unique in New England for its high tidal amplitude, wide intertidal expanse, diverse flora and fauna, and presumed high intertidal productivity, much of which is thought to be related to extensive intertidal fucoid populations. The goals of this study were: 1) to estimate intertidal rockweed biomass and productivity, 2) to quantify the variation in rockweed productivity over a range of temporal and spatial scales (high- vs low-flow sites at headlands and coves, respectively), and 3) to estimate the contribution of rockweeds to detrital pools. Net productivity was determined by separately weighing growth in the current year vs growth from preceding year classes. Sampling the same populations in both the fall and following spring allowed adjustment for winter mortality of thallus structures and productivity at two sites.

Variation in the length of apical tips of canopy shoots was high, and differences among sites were not significant. However, growth of tips of sub-canopy and lateral shoots was site-specific. Standing crop at low-flow sites ranged from 11.4 kg wet weight m2 at Bar Island to 28.9 kg wet weight m2 at Bell Farm. Standing crop at high-flow sites ranged from 8.5 kg wet weight m2 at Birch Point to 26.7 kg wet weight m2 at Mahar Point. Adjusted productivity estimates ranged from 22 to 105% greater than unadjusted values. Highest productivity estimates for Ascophyllum (14.9 kg wet weight m2 yr1 or 894 g C m2 yr1) occurred at Mahar Pt., a high-flow site. This unadjusted estimate was 50% higher than the average value (594 g C m2 yr1) from the two sites adjusted for winter losses, Bell Farm and Bar Island. Turnover rates of Ascophyllum ranged from 29 to 71% (mean over all sites = 54%) indicating that the biomass of this alga turns over approximately every two years. About 60% of the standing biomass (3.96 × 106 g C yr1) is added to detrital pools, contributing large amounts of energy for secondary consumers. Rockweeds in Cobscook Bay are among the most productive cold-water intertidal assemblages and contribute substantial amounts of carbon to this large embayment.

During late summer and early autumn of both 1984 and 1985 the authors observed and photographed the development of a green algal bloom on intertidal mudflats in eastern Maine, USA. The bloom culminated in the formation of thick (8-10 cm) mats and long (> 50 m) serpentine rope-like structures. The algal mat was polytypic but composed primarily of Enteromorpha intestinalis L. The authors describe the probable sequence of events which led to the formation of algal ropes. The processes involved appear to parallel the development of ball-like masses in other algae. Algal ropes developed after mat formation, as prevailing winds and tidal currents rolled individual and entwined strands across the mudflat. The great mass of algae eventually became embedded into the sediment surface producing anoxic conditions in the substrate up to several cm deep. The ecological significance and possible negative effects of this altered environment on a commercially important bivalve species are discussed. 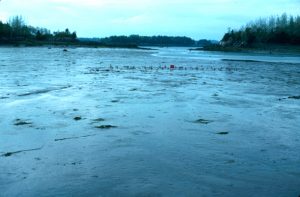 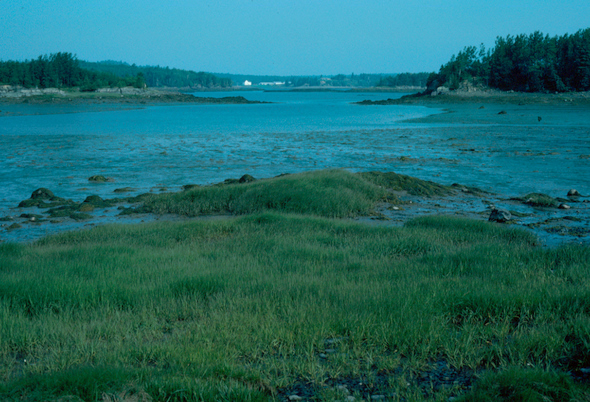 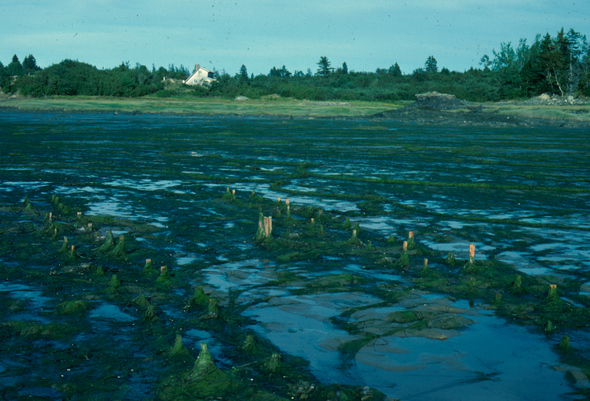 The same intertidal flat near the wooden stakes on 6 September 1985. 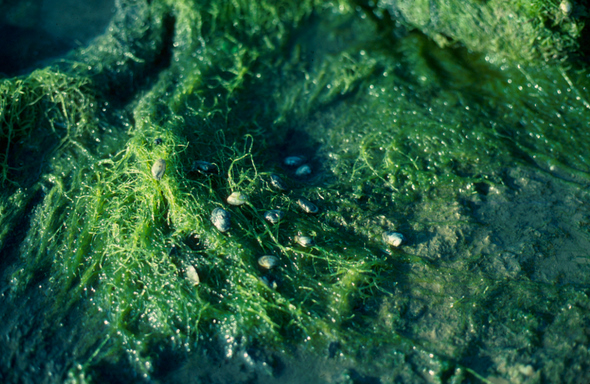 Wild juveniles of the soft-shell clam, Mya arenaria, entrapped in the green algae in Sept. 1985. 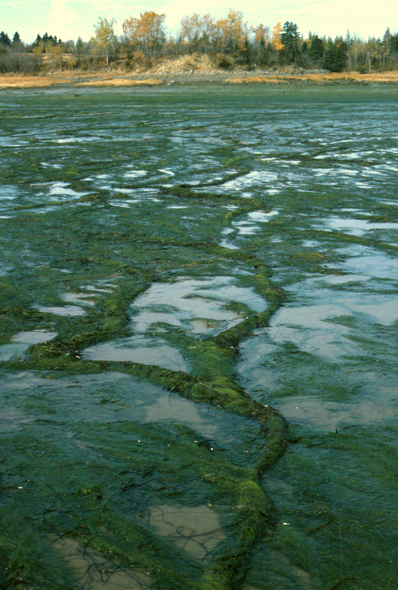