2002.  Survival and growth of hatchery-reared individuals of the European lobster, Homarus gammarus (L.), in field-based nursery cages on the Irish west coast. Aquaculture 210, 137-157.

At present, one of two strategies is employed by fisheries managers for enhancing wild stocks of homarid lobsters using hatchery-reared individuals. The first is repeated releases of large numbers (>5000 at a time) of postlarvae (stage IV and V; carapace length [CL]=5-7 mm) to selected bottom locations. This option exists primarily because these programs lack space, time, and/or the finances to rear animals to larger sizes that would most likely have initially higher survival rates. The second is to rear animals in the laboratory for 5-8 months to stage XII+ (CL=12-16 mm) and then release small numbers (<1000) of these relatively large juveniles. To date there has been no attempt to release large numbers of relatively large juveniles because the costs are too prohibitive. We have developed a low-cost, low-maintenance, field-based nursery caging system for rearing cultured lobsters, Homarus gammarus (L). Individuals (780 and ranging in CL from 5.2 to 7.2 mm) were reared in pre-fouled and unfouled containers (360 cm3) fabricated from an extruded plastic netting (3.2 mm aperture) and in pre-fouled plastic petri dishes (200 cm3) that were deployed in five near-bottom cages for 10 months (September 2000 to June 2001) at two subtidal sites located in a shallow, relatively exposed embayment on the west coast of Ireland. Animals apparently were able to survive and grow by suspension feeding on the plankton and/or foraging on the fouling community that settled on and within individual containers. Mean recovery rate (±95% CI) was independent of a priori fouling treatments, but was site-specific (42.1±7.9% and 27.8±13.7%; n=5). These rates are minimal estimates of survival because we found that at least 20% of the animals were capable of escaping from the mesh containers. Mean recovery in petri dishes that prohibited emigration was 53.3±37.02% at one site and 75.0±23.1% (n=5) at the other. These recovery rates compare favorably with survival rates of fed conspecifics held in the laboratory over the same time (54/81=66.7%). At the end of the experiment, animals in field cages had mean CLs that were significantly smaller than the fed controls. Because of costs incurred with maintaining small lobsters under laboratory conditions, results of this short-term, manipulative field experiment indicate that field-based nurseries represent an economically viable, third option for managers of lobster stock enhancement programs. 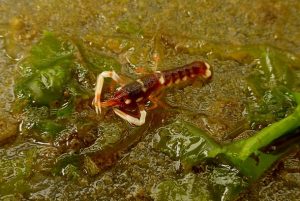 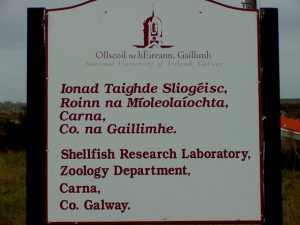 Laboratory and field work was conducted in 2000-2001 at the Shellfish Research Laboratory, Carna, Ireland. 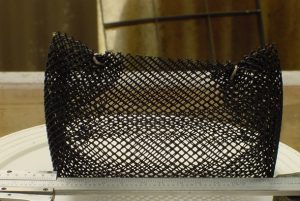 A flow-through container constructed of extruded 4.2 mm plastic netting.  One juvenile lobster was placed in each container. (A 15 cm Vernier caliper is shown for scale.) 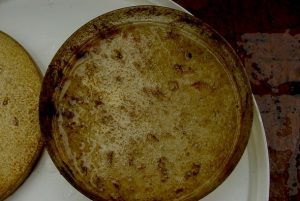 A converted lobster cage (lobster nursery) constructed of vinyl-coated wire used to house flow-through containers with a single lobster each. 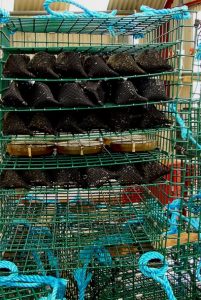 Flow-through containers were placed on each shelf (72 lobsters per nursery cage), and ten cages placed in the embayment adjacent to the Shellfish Research Laboratory from August 2000 to June 2001. 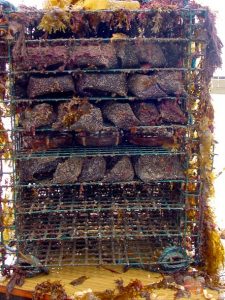 One of ten lobster nursery cages and flow-through containers after 10-months in the field. 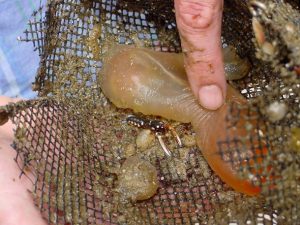 Approximately 30% of lobsters in extruded mesh containers survived over the 10-month field trial.  Lobsters doubled in size during this time. 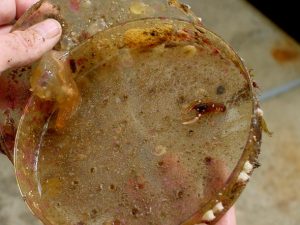 Approximately 65% of cultured lobsters survived in the Petrie dishes over the 10-month field experiment.  Lobster survival was significantly higher in the dishes because animals could not escape since the dish cover and base were well-secured.  The same was not the case for lobsters in the extruded mesh containers that allowed approximately 10-15% to escape.