Through the years, DEI has conducted research on sea scallops, Placopecten magellanicus, in the hatchery and in the field and has also raised cultured scallops in the hatchery.

DEI’s hatchery has a specially built Boreal Culture Room for the conditioning of broodstock and rearing larvae and juveniles of colder climate species. The room keeps seawater temperature below 50oF (10oC). Replaced during the 2018 expansion, the original Boreal Culture Room opened in August 2010 for a project involving juvenile wild sea scallops.

Typically, Sea scallops spawn in the late summer or early fall. Sometimes it is not possible to collect well-conditioned broodstock from the wild. Therefore, DEI developed a regimen of feeding adult scallops with several species of cultured microalgae and, with decreasing and gradually increasing seawater temperatures, DEI has been successful in getting sea scallops to spawn just about any time of year. 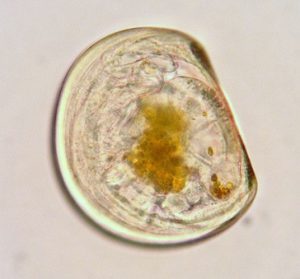 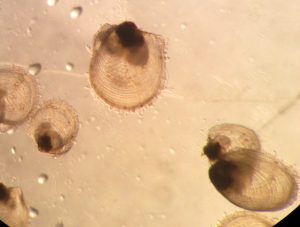 Left: a 20 day old scallop with a fully-developed larval shell and a full gut of digested cultured microalgae (photo taken on Dec. 29 by Kyle Pepperman).

Building upon the 2007-2009 DEI study, this research project examined wild sea scallop enhancement methods for the fishery in eastern Maine through the culture and wild collection of scallop juveniles, intermediate grow-out methods, predator prevention and control, and environmental protection [...]

The Downeast Institute, the Maine Department of Marine Resources, and University of Maine Sea Grant Extension worked with Jonesport and Beals Island scallop fishermen to test a plan the fishermen developed to enhance the region’s scallop fishery from May 2007- May 2009. With commercial [...]