The intertidal soft-shell clam Mya arenaria fishery in Maine is comanaged under a cooperative agreement, or shellfish ordinance, between coastal communities and the state. The ordinance, among other things, defines conservation tools that encourage communities to engage in activities with a goal to enhance local densities of 0-y class individuals of this infaunal bivalve. One method used by communities for over 75 y is referred to as “brushing,” which involves forcing dozens of the recently cut white spruce Picea glauca boughs (approximately 70 cm in length) vertically into the soft sediments of a mudflat so that 40–45 cm protrudes into the water column. Typically, multiple rows of boughs are deployed on flats in the spring before clam spawning where they remain through the fall after annual settlement and recruitment have ended. Brushing purportedly results in slowing down tidal currents and creating eddies that allow recently settled clams that otherwise are susceptible to bedload transport away from the flat to establish themselves in the vicinity of the boughs. During spring–fall 2019, a comparative field experiment was conducted at three intertidal flats within a 160-km stretch of the Maine Coast to test, for the first time, the efficacy of this traditional management tool versus another approach used to enhance local densities of 0-y class clams—predator-exclusion netting. At each flat, neither treatment enhanced densities when compared with controls of recruits of Mya as well as recruits of another commercially important infaunal bivalve that occurred at a single site, the northern quahog Mercenaria mercenaria. That is, neither bivalve responded positively to experimental additions of spruce boughs to soft sediments at any study site. Passive bivalve collectors demonstrated that both species settled into plots, ruling out recruitment limitation. Comparison of recruit densities between collectors and core samples from both brushed and netted plots demonstrated losses greater than 97% for Mya and greater than 93% for Mercenaria. Collectors also provided data on densities of recruits of the invasive green crab Carcinus maenas, which ranged from 1.2 to 13.9 ind. m–2 across sites, and were 3–6× more abundant in collectors within plots with brush or netting versus adjacent control plots, suggesting that this predator selects heterogeneous versus homogeneous environments during its early life history. As green crab populations in Maine vary directly with seawater temperatures, and the Gulf of Maine is warming relatively rapidly, adding potential habitat for green crabs, such as brush, to intertidal flats should be discontinued in favor of more effective methods to enhance local densities of 0-y class individuals.

Biotic and abiotic factors affecting survival and growth of recently settled infaunal bivalves not only determine the strength of 0-year class populations, but the structure and function of benthic soft-bottom communities. At mudflats across north-central Casco Bay, a 517 km² embayment in the western Gulf of Maine, USA, intertidal sediments are generally acidic (pore water pH range = 7.09–7.85), which can negatively affect settlement and subsequent recruitment success of infaunal bivalves due directly or indirectly to shell dissolution. In addition, predation on bivalves by invasive green crabs, Carcinus maenas, and native consumers is intense in this region. Two commercially important infaunal bivalve species occupy these sediments (softshell clams, Mya arenaria; hard clams, Mercenaria mercenaria). Fisheries managers, legislators, and others have suggested that adding crushed shells of M. arenaria to the surface of mudflats can ameliorate negative effects of acidic sediment pore water through chemical buffering. We investigated the interactive effects of modifying surface sediments using crushed and weathered shells of Mya and predator exclusion on abundance and size of 0-year class individuals of these two bivalve species in large-scale plots (9.3 m²) and small-scale experimental units (EU; 182.4 cm²). Field experiments were conducted over three years (170–204 days yr−1; each initiated prior to spawning and continuing well after settlement had ceased). Shell hash in large-scale plots (mean particle size = 19.3 mm) varied across three levels (0, 0.63, and 1.27 kg m²), and between 0 and 1.27 kg m² in EU where shell size varied from 1.9–19.3 mm. Small-scale experiments also used granite chips that, like crushed shells, increased habitat heterogeneity but did not buffer sediments. Density and size of both bivalve species at the end of most field trials were significantly greater in predator-exclusion treatments vs. controls independent of shell treatment. In all trials, neither Mya nor Mercenaria responded positively to the presence of shell additions. Fisheries managers should focus attention on mitigating effects due to predators instead of spreading shell hash to buffer intertidal sediments.

Overwinter mortality of juvenile northern quahogs, Mercenaria mercenaria, is a major impediment to the aquaculture industry from the mid-Atlantic US through Atlantic Canada. Mortality occurs during prolonged exposures to low temperatures and/or during the winter–spring transition when water temperatures are rising. Recent efforts to overwinter juveniles of M. mercenaria produced from native Maine (ME, USA) broodstock in eastern ME have found high survival while using a newly adopted methodology (i.e. cages in the water column rather than the standard practice of bottom planting) for overwintering. The current study aimed to determine if the high survivorship was a result of the culture methodology or if the ME genetic stock is better adapted for overwinter survival. Field studies were performed across two consecutive winters in Maine (ME), New York (NY) and New Jersey (NJ, USA) to compare survivorship of two size classes of juvenile M. mercenaria using the new methodology to the standard practice of bottom planting, and to compare the survival and physiological condition of the ME stock vs. the NY and NJ stocks across a latitudinal gradient. The ME stock had greater survival than the NY and NJ stock at all sites and in both study years. Both of the ME size classes exhibited lower mortality (< 12%) through the onset of winter and when temperatures were < 5 °C suggesting greater tolerance to low temperatures, while the NY and NJ stocks experienced very high mortality (up to 87%). However, the ME stock did experience significant mortality in the spring when water temperatures were rising in NY and NJ in both years and in ME during the second study year which was abnormally warm. Mortality of all stocks coincided with a decline in carbohydrate reserves. Survival was greater in field plots as compared to the overwintering cages in NY and NJ but no significant difference was observed in ME. The results demonstrate that alternate methodologies used to successfully overwinter juvenile M. mercenaria in eastern Maine cannot be applied effectively to more southern locations. However, the results suggest that selective breeding programs may be able to develop aquaculture stocks that are better adapted to overwintering conditions.

The easternmost commercial population of hard clams, Mercenaria mercenaria, in Maine was discovered recently near the low intertidal in Goose Cove, in the town of Trenton (Hancock County). A fast- and slow-growing morph was identified that reaches commercial size (50.8 mm shell length) in 4 years and 5 years, respectively. Fast-growing individuals were selected as broodstock, and conditioned to spawn at DEI. The fate and growth of cultured juveniles was followed for 5 months beginning in July 2006 at 4 stocking densities (2,500–10,000 animals/1.1 m2 floating, nylon window screen-lined tray; n = 20) at a coldwater field nursery approximately 60 km east of Trenton, in the town of Beals, ME (Washington County). Survival was nearly 100%, and growth was density dependent, with animals attaining a final mean shell length ±95% confidence interval of 8.4 = 0.13 mm and 7.6 ± 0.218 mm in the lowest and highest density treatments, respectively. In November 2006, cultured seed was separated into 2 sizes (large, 8.7 ± 0.2 mm; small, 5.1 = 0.2 mm) and overwintered in window-screen bags (0.2 m2) at densities ranging from 0.6–1.6 kg (large) and 0.5–1 kg (small), representing approximate densities ranging from 3,360–15,510 individuals per bag. Bags were placed on horizontal shelves within modified lobster traps (overwintering containers) that were added to a 35,000 liter tank receiving ambient seawater for 177 days until May 2007. Seawater temperatures during this interval ranged from -1-10°C. Survival rates exceeded 99%, and no negative effects resulting from stocking density were observed. Hatchery seed was transplanted in May 2007 to the lower intertidal at Goose Cove and a second intertidal location approximately 30 km east of Beals at Duck Brook Flat, in the town of Cutler, and the fate and growth of these juveniles was followed for 6–7 months. Survival was independent of planting densities (330–1320 individuals/m2), and predator netting did not enhance survival compared with controls without netting. Growth was seasonal, with the greatest incremental shell increases occurring between early July and late September. Growth rates varied between planting locations, with clams adding approximately 10 mm shell length at Goose Cove between May and December (initial shell length, 8.2 mm; final shell length, 17.9 mm) and approximately 5 mm shell length at Duck Brook Flat between June and November (initial shell length, 9.3 mm; final shell length, 14.3 mm). Hard clam farming in eastern Maine may help to diversify a wild shellfish industry that is currently in decline for most species except lobsters; however, additional efforts are needed to explore alternative grow-out sites and methods to enhance growth rates. 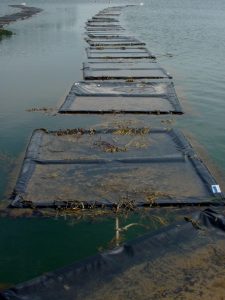 Nursery trays for rearing hard clam juveniles.  Trays are lined with fiberglass window screening material (aperture ca. 2.4 mm).  Black plastic is stapled to the wooden tray to deter seagulls from breaking through the screening and eating the small clams. 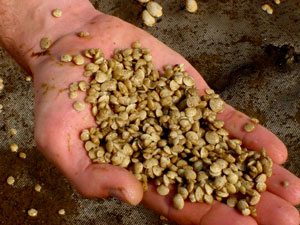 Juvenile hard clams cultured at the Downeast Institute during the summer and fall of 2008.

Two species of snapping shrimp, A. heterochaelis and A. normanni , collected near Beaufort, North Carolina, during June 1982, and then held in the laboratory, used their major chelae to crush and consume juveniles of the hard clam Mercenaria mercenaria. Snapping shrimp (19.1 to 39.4 mm in total body length [TL]) ate clams in the largest size-class (15.1 to 20.0 mm in shell length), but preferred smaller clams when offered equal numbers in this large size-class and in each of three smaller size-classes. Female snapping shrimp, regardless of species, exhibited a statistically higher predation rate than males when the results of five separate experiments were combined. The major chelae of the females of specimens of A. heterochaelis (>32.0 mm TL) were smaller than those of equal size males. Alpheus heterochaelis (19.1 to 27.2 mm TL) had a larger major chela for a given body length than did specimens of A. normanni; however, predation rates of the two species were not significantly different. The number of clams crushed was related to both the size of the major chelae and total body length for A. normanni, but not for A. heterochaelis. Alpheus spp. inflict two types of shell damage which are identical to those caused by blue crabs. These results imply that previous studies may have overestimated the importance of crab predation and underestimated or ignored the importance of predation by snapping shrimp.