2015. Spatial and Temporal Variability of Spawning in the Green Sea Urchin Strongylocentrotus droebachiensis along the Coast of Maine. Journal of Shellfish Research 34(3): 1097- 1128.

The timing and spatial variation in spawning in the green sea urchin Strongylocentrotus droebachiensis (Mu€ller) was investigated at three moderately protected sites in each of three geographic regions along the coast of Maine before the commencement of significant commercial harvesting. Urchins were sampled monthly (1987 to 1988) from subtidal hard bottoms, and test diameter (TD), height, total wet weight, and gonad wet weight were measured. To interpret reproductive and spawning patterns additional data were taken on habitat type, water temperature, salinity, urchin density, and diets. Over a range of TD (34.1–89.4 mm), 1,594 urchins were sampled. Gonad index (GI) increased as an allometric function of TD, and for urchins from the northeast and southwest regions, GI was independent of TD for animals $64 mm. In the central region, the size at independence was $55 mm. Analysis of variance with a priori, planned contrasts was used to quantify temporal changes in GI and spawning at two spatial scales (within and between regions). This information serves as a preharvest baseline for green urchin dynamics, analysis of reproductive cycles and spawning, and for current and future ocean changes. Gonad index and spawning varied seasonally, spatially and interannually. Gonad index increased during fall and early winter, and peaked in midwinter before a major spawning event in April at seven of nine sites. Gonad index ranged from 10% to 20% from December to April. Spawning [measured as a steep decline in GI (48%–78%) between successive sampling dates) occurred between early April and mid-May, except at one site in the central (Lamoine: March to April) and one in the northeast (Jonesport: May to June) regions. Gonad index patterns during spawning corresponded inversely to increasing seawater temperatures in the range of 2.5–5 C. Salinity, urchin density, and test size did not explain a significant proportion of the variability in mean GI through time. Diets consisted primarily of diatoms and microalgae on ledge, sediment, and coralline barrens and showed no regional trends. Sex ratio explained a significant portion of the variability in mean GI at only one site. Seawater temperature, however, explained 55%–77% of the variability in mean GI through time. Predicting when spawning occurs in natural populations is central to the sea urchin fishery by refining estimates of what are termed harvest windows (HW). The HW represents a segment of time during the general spawning season when GI are at, or above, a specified percent, for example, 10%. A review of the literature uncovered 19 different techniques to determine GI and assess spawning. Of 167 papers published between 1922 and 2013 in which methods of spawning in wild populations of sea urchins were described, 84 and 134 used histology and GI, respectively. This study contributes to the questions of dependence of GI on test size, first illuminated by Gonor (1972), and the general practice of interpreting minor declines in GI as fractional spawning events, rather than simply sampling noise. The use of statistical tests is encouraged to define aspects of the reproductive cycle in sea urchins.

We tested whether the roe (gonads) of “post-spawned”, green sea urchins, Strongylocentrotus droebachiensis, from barren grounds could be enhanced in the field during summer. Experiments were initiated using a low roe-yielding (barren ground) population, which also served as a field control. Specifically, we determined the ability of naturally occurring macroalgae to increase roe yield and enhance roe color relative to field controls. Sixty experimental cages with algae and five test animals per cage (mean test diameter=50.0 mm) were suspended along the seaward end of a commercial lobster impoundment on Beals Island, Maine, on 18 June 1996. Urchins were fed ad libitum all (mixed diet) or one of four species of macroalgae (Palmaria palmata, Alaria esculenta, Laminaria saccharina and Ulva lactuca). Four replicate cages of each algal treatment and 20 individuals from the control population were sampled (without replacement) every 3 weeks until 20 August. This design permitted the use of orthogonal contrasts in both one- and two-factor ANOVAs. These analyses revealed significant enhancement, relative to controls, of both color and roe yield (gonad index doubled or tripled within 2 months). Algal-fed animals attained a mean gonad index greater than 10%, the minimum commercial standard in Maine, while field populations ranged from 4% to 6%. These analyses revealed differential roe enhancement among palatable seaweeds. The red alga, P. palmata, induced the quickest and highest response, singly, among the four algae tested. Roe production on P. palmata was generally higher, but similar to that of the mixed diet. The two kelp species, A. esculenta and L. saccharina, consistently produced the lowest yields. Roe yields were correlated with protein levels in the algae. Our study also provides some insight into seasonal allocation of energy and nutrients into gonadal tissue. These data show that off-season allocation to gonadal tissue is biologically feasible in the absence of photoperiodic manipulation and that summer enhancement could be used to meet the off-season (August) market demand for roe in Asia. 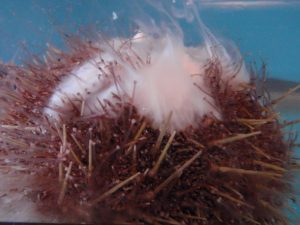 Left: Male green urchin, Strongylocentrotus droebachiensis, spawning in a tank at the Downeast Institute on May 16, 2011.