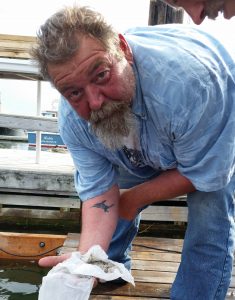 Clammer Mike Ashby holds a handful of Downeast Institute produced seed clams he is planning to grow in an upweller.

In 1987, to address the decline of eastern Maine’s soft-shell clam populations, the organization (that was known at the time as the Beals Island Regional Shellfish Hatchery), began producing cultured juvenile clams to reseed clam flats.

Since then, the organization has produced hundreds of millions of seed clams for coastal communities in northern New England.  DEI has developed techniques for hatchery production of soft-shell clams, as well as growing, overwintering, and seeding clam flats, and transferred those technologies to municipal shellfish committees, clammers, and the scientific community.

By DEI
In Fisheries Stock Enhancement & Restoration
Posted May 19, 2021

How to Take a Benthic Core Sample for Resource Assessment

Core sampling is a highly accurate resource assessment tool. Use it to conduct shellfish surveys and to determine the effectiveness of management activities.

A collaboration between the Town of Gouldsboro, Schoodic Institute, and RSU-24 that grew out of Downeast Institute’s three-year community clam culturing project is an informative, inspiring story [...]

Join us August 11th for this annual event and our ribbon-cutting ceremony for our new facility.