During 2021, Downeast Institute and partners continued our work testing the effects of sediment buffering (adding crushed shells to mudflats) vs predator protection on commercial shellfish recruitment, growth, and survival. Building on the results of applied field experiments conducted in 2014, 2015, and 2016 (Beal et al. 2020), we incorporated porewater carbonate chemistry analysis to provide further insight into the effects of adding crushed shell to the mudflats.

During 2019 the Maine Coastal Program and Casco Bay Estuary Partnership conducted an oyster shell recycling program with Portland area restaurants. The Ocean to Plate to Ocean project ultimately collected thousands of pounds of shucked oyster shells that would otherwise remain in the waste stream. Shells were stored in containers at EcoMaine while they “cured” to ensure they were free of non-native bacteria. The goal of the project was to return the oyster shells to the marine environment, though those plans were put on hold during 2020 due to the Covid-19 pandemic. 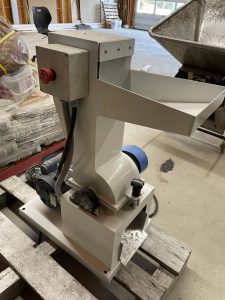 Crushing shell for sediment buffering is considered optimal as it reduces shell dissolution time, thereby shortening the time before any shell effects occur. Upon discovering the typical shell-crushing machines cost over $10,000, the project team researched and tested various options for shell crushing. Ultimately an glass/bottle crusher  (INTSUPERMAI 220V) was purchased through Walmart at a cost of approximately $1,000. Downeast Institute’s facility team modified the machine by adding a new motor (necessary for crushing moderate to high volumes of shells), creating a new electricity plug compatible with U.S. electricity sockets, welding a plate that will allow for easier adjustment, and installing power switch and an emergency off switch to provide a level of safety for operators.

Oyster shells were transported from South Portland to the Downeast Institute’s facility in Beals for crushing. 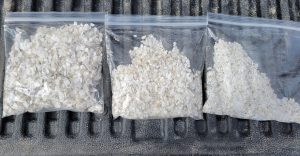 The Mill Creek mudflat site in the Fore River in South Portland was chosen due to the availability of existing data (Green et al. 2013) and accessibility. In addition, the Fore River was the site of previous DEI experiments on clam recruitment, growth, and survival (see here for more information).

Before clam spawning occurred, in April 2021, sediment core samples were taken to establish baseline acidity and shellfish density at the site. 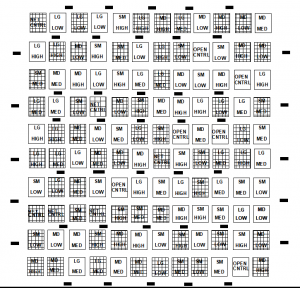 The field layout of the 2021 oyster sediment buffering experiment.

The following day, one-hundred and twenty plots (1 meter x 1 meter) were laid out in the lower-mid intertidal area of Mill Creek. There were 20 treatments with varied shell size (small, medium, or large) and varied shell density (low, medium or high), replicated 6 times. In addition, half the plots were protected from predators, while the other half was not.

In addition, 40 recruitment boxes, designed to measure how many shellfish recruited to the site by protecting recruits from predation, were placed around the outside of the field site (n=20) and interspersed within the site matrix (n=20). 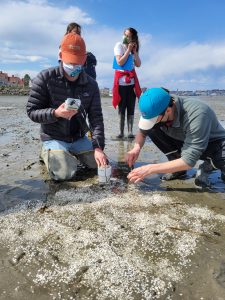 The field experiment remained deployed until the end of the clam growing season, in early fall (October 10-12). At that time 600 benthic core samples were taken to establish shellfish densities in the plots, the 40 recruitment boxes were removed for processing to determine how many shellfish settled the area, and final carbonate chemistry samples were taken to establish end of season effects of shell hash application.

This work was funded by the Casco Bay Estuary Partnership through the U.S EPA.