DEI has been systematically measuring and recording clam survival in eastern Maine for over two decades. Working with the University of Maine at Machias, we have been conducting clam growth and survival experiments since 1999 at Duck Brook Cove in Cutler.

This earlier research showed that: 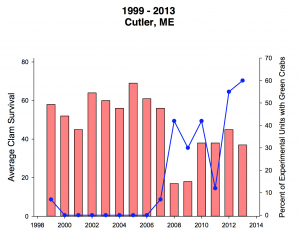 Average clam survival vs. percent of experimental units containing green crabs at Duck Brook Flat, Cutler, ME from 1999 to 2013

In 2017, in response to requests from six downeast clam committees, DEI taught clammers our predator deterrent techniques to help demonstrate how they can measure clam growth and survival in different flats, as well as the effect of predator protection on clam survival. This project was designed to help clammers in these communities measure the effectiveness of seeding, predator deterrents and other conservation strategies on enhancing clam populations. From 2017-2019, DEI worked with the towns of Gouldsboro, Steuben, Milbridge, Addison, Machiasport, Perry, Pembroke, Trescott and Edmunds on the Community Clam Culture project. With DEI’s assistance, clammers and others:

1) Deployed, monitored, sampled, and assessed the effectiveness of predator deterrent netting on clam survival and growth in areas seeded with hatchery-reared juvenile clams at one or more locations within each town.

2) Measured rates of wild clam recruitment and compared survival and growth of cultured clams at two flats in each town. This effort helped committees predict the best places to deploy nets the following year.

Results over the three years consistently demonstrated the benefits of using predator netting to increase clam survival, and showed clam committees how to use research methods to monitor the effectiveness of conservation measures.

The video below shows the 2017 results from six towns as presented at the 2018 Fishermen’s Forum.

Click here to see the 2017 results in PDF format.

The 2018 results for the communities were presented at the 2019 Maine Fisherman’s Forum.

Click here to see the 2018 results in PDF format.

The 2019 results for the communities were presented at the 2020 Maine Fisherman’s Forum.

Click here to see the 2019 results in PDF format.