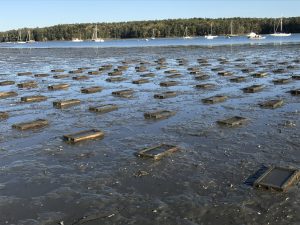 The experiment was deployed in the mid-intertidal of Collins Cove/Yorkies in Freeport at the beginning of May, in partnership with the Maine Clammers Association. 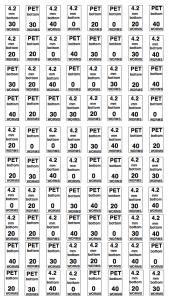 We used 80 experimental units (EU), which were 4-ft x 2.5-ft x 6-inch deep wooden boxes. One-half (40) of the boxes had a PetScreen® bottom that effectively excludes milky ribbon worms while the other half had a 4.2-mm flexible netting bottom that does not inhibit worms. To reinforce the bottoms, both types were backed by a 4-ft x 2.5-ft piece of vinyl-coated trap wire. The top of each box was covered with a piece of flexible netting with a 1/8-inch (3.2-mm) aperture.

Boxes were filled with ambient sediments from the study site. The ambient sediments were carefully checked for small green crabs and milky ribbon worms before being placed in the boxes.  400 juvenile clams were added to each box, requiring atotal of 32,000 clams. These juvenile clams had been raised by commercial clammers in an upweller the previous year as part of the same set of experiments. Each box received either 0, 20, 30, or 40 bloodworms (a total of 1,800 bloodworms).

The eighty boxes were sampled in September 2016 by taking five sediment cores (A = 0.02 ft2) from each box. The contents of each core sample were washed through 1-mm sieves and the number and size of live and dead, cultured and wild, soft-shell clam seed were  measured.

We were unable to determine if bloodworms do stop milky ribbon worm predation on clams due to the presence of other predators inside the boxes. We did, however, make two key discoveries. First, milky ribbon worms were able to enter boxes with a bottom mesh of 4.2-mm aperture, making this size netting ineffective in protecting clams from these predators. Second,  green crabs are pervasive and persist at very small sizes in the intertidal mud. Even though we were careful not to add any visible green crabs to the boxes, some were too tiny to detect and were inadvertently added to some of  the boxes. Most of the soft-shell clams were recovered dead with undamaged shells (from milky ribbon worms) or crushed/chipped shells (from green crabs). 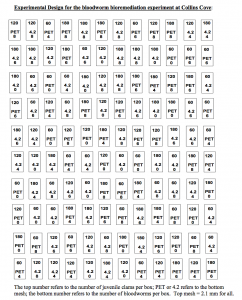 In 2017 we refined our study design based on what we learned in 2016 and continued to test the same hypothesis regarding whether the presence of bloodworms would result in a decrease of clam deaths from milky ribbon worms. Similar to the previous year, clammers from the Maine Clammers Association (MCA) assisted with deployment and sampling.

The experiment was set up in the same location (Collins Cove) and tidal height as 2016.

To avoid introducing worm and crab predators to the boxes by filling the boxes with ambient sediments from the mudflat, MCA clammers and DEI scientists-. filled the boxes with approximately 50 pounds of terrestrial sand from a local (North Yarmouth) gravel pit. The sand was moistened  with seawater before planting clams. MCA clammers dug 120 6-inch deep x 1-ft x 2-ft depressions in the mud, enabling each box  to sit nearly flush on the mudflat, creating conditions as close to natural as possible. 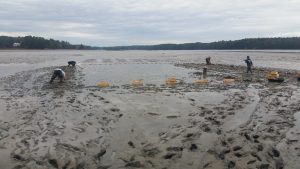 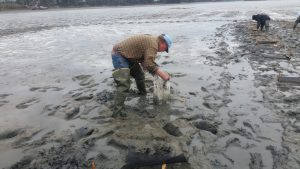 We added terrestrial sand to each of the 120 boxes.

The boxes were predator-protected with various mesh bottoms designed to allow or deter ribbon worms, and to retain the blood worms. One-half (60) of the boxes had a PetScreen® bottom (that excludes milky ribbon worms), and a half (60) of the boxes had a 4.2-mm flexible netting bottom (that allows milky ribbon worms to enter the box). Both types of bottoms were reinforced with a 1-ft x 2-ft piece of vinyl-coated trap wire. Each box had a top  made of a rigid mesh with a 2.1-mm (0.083-inch) aperture. 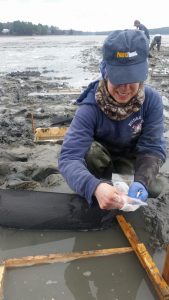 Planting clams in the EUs.

All boxes were sampled in November 2017, and the entire contents of each were washed through 2-mm sieves, allowing most of the sand to pass through , leaving only clams and worms. To determine the success of the bioremediation technique, number and size of live and dead, cultured and wild, soft-shell clam seed were recorded.

The samples from each box were frozen, and some of the 120 samples have been processed. Analysis of the data will be completed during summer 2021.