The second phase of our mussel research focused on four major components:

1) Developing hatchery techniques (broodstock conditioning and cryopreservation) that enable the production of mussels throughout the year.

Cryopreservation is a method used for more cost efficient hatchery production of shellfish, but no cryopreservation methods currently exist for Blue mussels. DEI investigated protocols for both broodstock conditioning and cryopreserving mussel gametes and larvae.

Our research has led to a process that enables DEI to produce significant numbers of mussels (tens of millions of animals) in a relatively short time (4-5 weeks), at a reasonable price. Plans are underway to transfer this technology to growers in 2021.

Cryopreservation attempts have been unsuccessful at preserving and storing viable mussel larvae. Specifically, our study evaluated the effects of several cyroprotectants and their concentrations, loading and unloading strategies, as well as freezing and thawing method to develop a protocol for cryopreserving gametes and early larval stages (trocophores), following published guidelines that have been successful with other species of mussels (Wang et al., 2011; Paredes et al., 2012). None of the methods produced viable gametes, embryos or larvae after being placed in suspended animation.

Our research indicates that it isn’t necessary to store larvae as it is possible to produce high quality larvae almost year round through temperature manipulation.

2) Testing different types of mussel settlement substrates in the hatchery and field.

Mussels use byssal threads to anchor to substrates, which is why mussel farmers often grow them using suspension and ropes. DEI tested different types of rope, one from New Zealand specially designed for catching and growing mussels as well as lobster rope, to determine which is best to grow mussels on.

Downeast Institute performed two trials in our Center for Shellfish Production and Research and at three mussel farms. Our results found that lobster ropes worked best to grow mussels. The New Zealand rope did not perform well in the field due to the large amount of surface area which becomes colonized by members of the fouling community. The results of the trials is good news for growers as the lobster ropes cost considerably less than the specialty mussel rope and also serves to repurpose lobster gear. 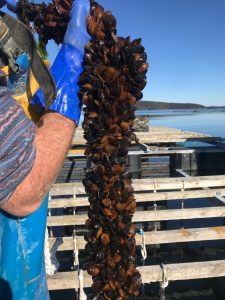 Mussels set in the fall of 2019 pictured in early February 2020. Picture by Evan Young.

In addition to settling tests conducted in our Center for Shellfish Production and Research, DEI conducted  “remote-setting” trials at two mussel farms to determine if this technique for settling mussels onto ropes could be viable alternative to hatchery settling in order to cut costs for mussel farmers.

DEI initiated two trials in 2018 at the nursery site of Blue Hill Bay Mussels in south Blue Hill. While the trials did produce seeded ropes more work needs to be done to optimize this technique. DEI will run a number of trials in Blue Hill during the 2020 growing season.

DEI delivered hatchery set ropes to three mussel farms three times during the spring and summer of 2018 to test if farms would benefit from the opportunity to raise more than one cohort (crop) per year.

Our research found that raising more that one cohort per year is desirable and doable. We have solved the problem of total reliance on natural recruitment of blue mussels by creating an economically viable hatchery solution for seed production.   Although small scale, DEI intends to use our recent findings to help us scale up production in 2020 to meet the commercial needs of our participating farmers. We are currently producing tens of millions of mussel larvae and juveniles that will be deployed in the 2020 growing season to examine the cost and scale of commercial production. 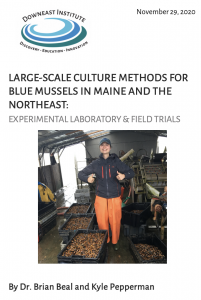 In 2020 DEI deployed 4,825 meters of hatchery seeded rope with approximately 33,000,000 juvenile mussels.  These ropes should yield 20,000 to 30,000 pounds of one-inch seed that will turn into 80,000 to 120,000 pounds of harvestable product in 2021.  This effort constitutes the first commercial production of Blue Mussels with hatchery origin on the east coast of the United States.

We were able to produce some good quality mussel ropes using remote settlement but it still is unlikely to be economically viable when compared to hatchery settlement. 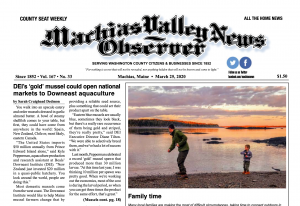 Read about our breakthrough in the March 2020 volume of The Fishermen’s Voice and Machias Valley News Observer.

This research was funded by the NOAA Sea Grant National Strategic Initiative in Aquaculture through Maine Sea Grant.