Evan Young owns Blue Hill Bay Mussels, an ocean farm that annually produces up to 300,000 pounds of rope-grown, eastern blue mussels.  Like all Maine mussel farms, Evan’s depends on wild mussel seed, which begin as microscopic, free-swimming larvae, settling onto his farm’s ropes.  When natural settlement became more and more unreliable, Evan reached out to Downeast Institute to find out if a hatchery could provide cultured seed to minimize risk to his business.  He was also interested in learning if hatchery mussels could be produced using adults with a rare golden-striped shell.

In 2012, DEI began to develop economical hatchery methods and technology to rear commercial numbers of mussel larvae and juveniles.  Working with Evan and his crew, ideas were tested and refined, both in the hatchery and on the mussel farm, resulting in the development of methods to maximize production, making the farm more resilient.  DEI now has the ability to produce hundreds of millions of sustainably-reared mussel larvae annually and provide pre-seeded ropes to mussel farmers, using repurposed lobster rope.  Ropes can be seeded either with traditional blue mussels or the distinctive gold-striped mussels. 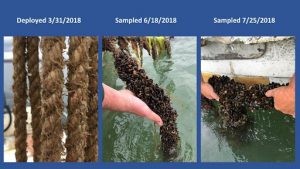 The gold mussels have a striking, unique appearance, growing to market size in as few as 14 months.  Fast growth makes their shells lighter than wild, slower-growing mussels, resulting in higher meat yields and better value. No seed is collected from the wild to produce these mussels, reducing pressure on the wild fishery (which is being negatively impacted by green crabs), as well as Maine’s mussel farms.

The research, technology transfer, and commercialization of seeded ropes and gold mussels have been funded by the National Science Foundation, NMFS’s Saltonstall-Kennedy grant program, and Sea Grant programs, as well as the Maine Technology Institute.