Maine Public featured efforts to sustain clamming in the face of warming waters and invasive green crabs in Gouldsboro. DEI has provided technical expertise through the years to support the town’s effort to build and start their own local clam hatchery. “Volunteers are trying to renew Gouldsboro’s clam flats, wiped out by warming waters and green crabs” was produced by Esta Pratt-Kielley. 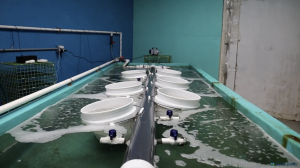 Kyle Pepperman, DEI’s Associate Director of Technology Transfer was interviewed for the piece. “The thing that puts the green crab population in check is very cold winters and several of them in a row, and we just aren’t having that anymore. So the population is growing just incredibly,” he said.

The story is part of Maine Public’s series “Climate Driven: A deep dive into Maine’s response, one county at a time.”