There is a great need in within Maine’s marine economy and coastal communities to adapt to the changing (warming) marine environment.

DEI provides science-based leadership to help shellfisheries adapt to the changing marine environment. Our immediate emphasis is on the crises caused by the predatory milky ribbon worm and invasive green crab. Our applied marine research provides valuable insights in how our communities can adapt to the warming ecosystem.

Since the early 1980’s, Gulf of Maine (GoM) Sea Surface Temperatures (SST) have been rising faster (0.03 °C/year) than the global mean rate of 0.01°C/year (Pershing et. al 2015). Since 2004, SSTs in the GoM have increased faster than in 99% of the world’s oceans, and scientists predict seawater temperatures will continue to rise. Maine winters have become milder and shorter (Fernandez, et al. 2015), with icing over of harbors becoming less and less common.

The increased temperatures have led to many negative consequences for fisheries, as explained below.

Over the past 40 years, during the same period of time the GoM has been warming, Maine’s commercial production of soft-shell clams, Mya arenaria, has  decreased nearly 75%. In 2017 statewide clam landings were the lowest since 1933. 2018 landings were up 3.75% over 2017 landings, but were the second-lowest in 58 years.

The graph below shows the statewide decline in Maine soft-shell clam landings, as well as rising winter sea surface temperatures in the Gulf of Maine from 1940 to 2018. 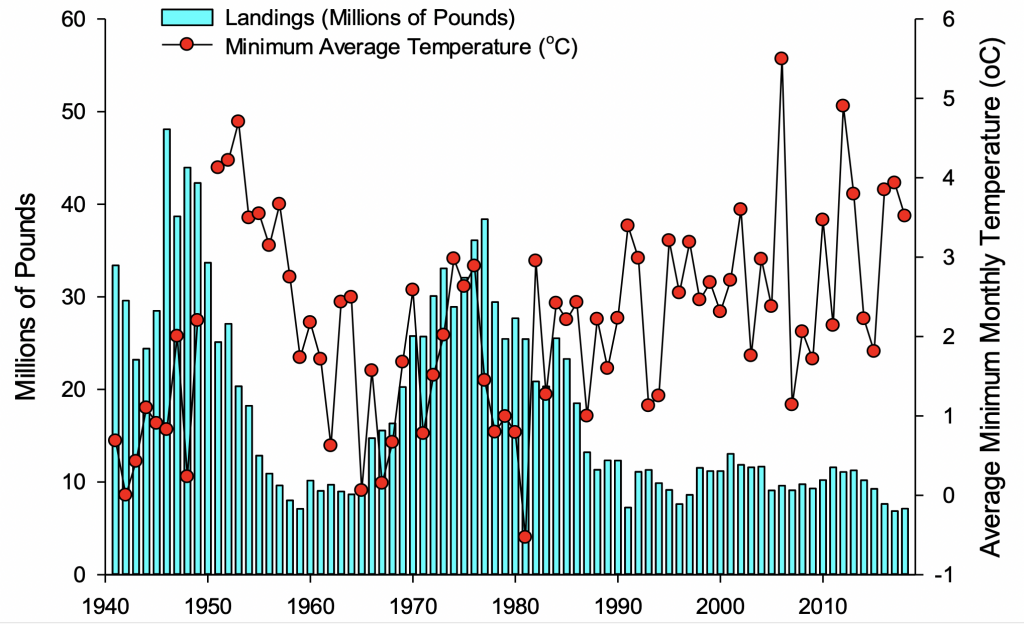 Green crabs are biologically adapted to warmer seawater. Locally, their populations have increased with warming waters and are expected to continue to rise with additional ocean warming.

Green crabs are invasive, which means they did not evolve within our ecosystem and foodweb and have no natural predators to keep their populations in check,  although ducks, fish, and other crustaceans will eat them opportunistically. In Europe, green crab populations are regulated by both biotic and abiotic factors; hence, their overall effect on creating crashes in shellfish populations is moderated, compared to their effect on similar populations here in North America.

Rising seawater temperatures cause an increase in the metabolic rates of green crabs and most other predators, resulting in hungrier, more active predators during the spring through fall.

Shellfish Management and Techniques to Adapt

Update Shellfish Management Tools: Many of Maine’s shellfish management techniques have remained the same for over 55 years (Dow & Wallace 1961, Hanks 1963). The exception was the establishment of a minimum clam size limit of two-inches in 1984. Results from DEI’s extensive and repeated field experiments indicate that updating traditional shellfish management tools to reflect the changing environment would benefit clam survival.  For example:

Clam Conservation Efforts Can Apply Lessons DEI Has Learned From Over 30 Years of Research: 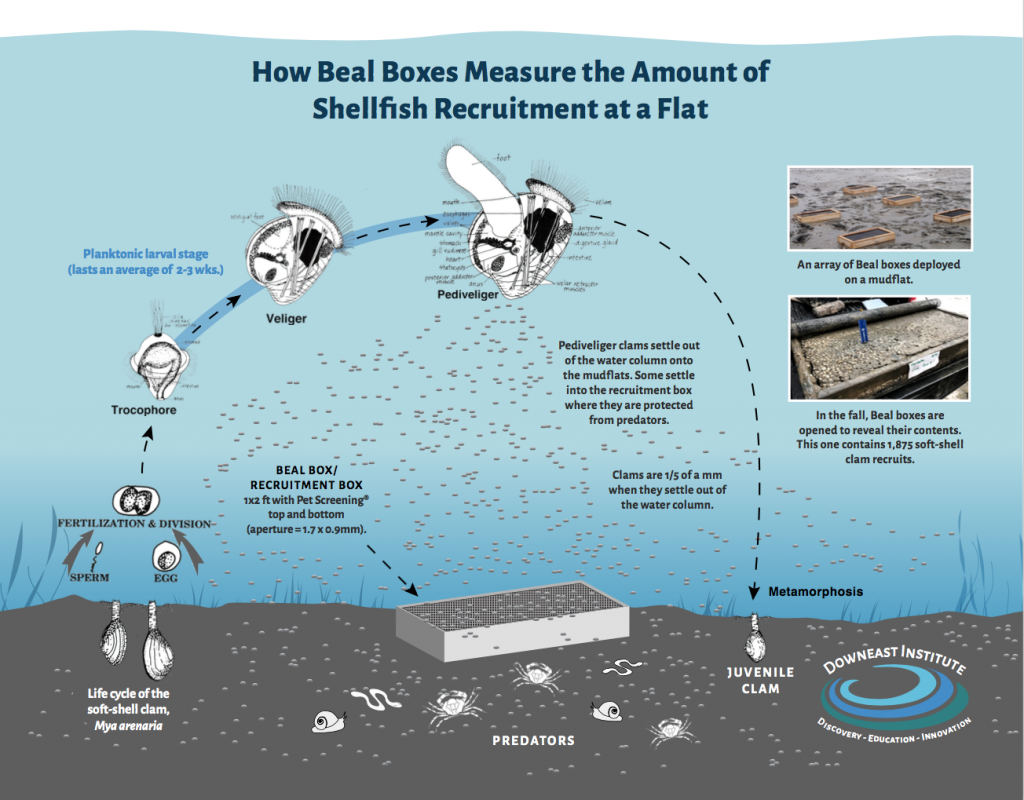 This diagram depicts how a recruitment box enhances understanding concerning the number of juvenile clams that are settling onto a mudflat.

Some of the techniques are explained in this editorial by DEI’s Director of Research Dr. Brian Beal and Maine Clammers Association President Chad Coffin.

Celebrate our community of marine innovation at our annual festival in Beals.