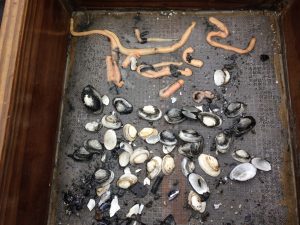 One of the more important findings from the 5-year investigation into the cause of the southern Maine clam decline was that in order for clams to survive they need to be protected not only from green crabs, but from milky ribbon worms as well.

Many of our 2014 experiments relied on using nets to protect clams from predation, as DEI has done in many coastal communities since the 1980s. Milky ribbon worms live and forage for their prey in the sediments so nets that cover only the top of the flat do not stop their predatory activities. 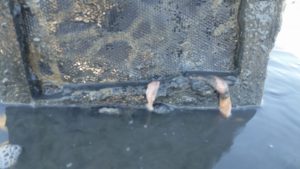 A milky ribbon worm thwarted from eating the clams in a recruitment box with a small mesh (PetScreen®) bottom.

When DEI scientists found low survival of soft-shell clam juveniles under nets, they moved to building and deploying wooden boxes that protect clams from the top and bottom, as well as the sides. Using boxes increased the rate of clam survival.