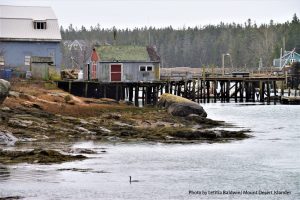 In Bunkers Harbor, lobster dealer and D B Fisheries owner Dana Rice has made available indefinitely and at no charge a metal-roofed shed (far left) to serve as the town’s shellfish resilience laboratory and pilot test for other coastal Maine towns. Clams will be raised there to replenish local clam flats. ISLANDER PHOTO BY LETITIA BALDWIN

GOULDSBORO — A former clam-buying station is poised to get a facelift and start operating as a shellfish laboratory next spring in Bunkers Harbor. The facility, which will raise and scatter baby soft-shell clams to replenish local flats, will serve as a trial balloon for other coastal communities.

On Bunkers Harbor’s eastern shore, longtime lobster dealer and D B Fisheries owner Dana Rice has made available part of a building that once functioned as Boston-based Bay State Lobster Co.’s clam-buying station decades ago. Back then, Rice estimates from 150 to 200 bushels of clams were bought and trucked out nightly from the facility at the head of the harbor.

“It’s theirs at no charge for as long as they need it and as long as I own it,” Rice said Monday, referring to the town of Gouldsboro, Schoodic Institute and Regional School Unit 24’s joint shellfish resilience project. The Downeast Institute on Beals Island and the Maine Department of Marine Resources also have been involved. To finance the evolving project, $27,800 already has been awarded by the Maine Shellfish Restoration and Resilience Fund, Maine Community Foundation and the Schoodic Fund.

Rice, who heads the Gouldsboro Board of Selectmen, praised Gouldsboro Shellfish Warden Mike Pinkham for his foresight and collaboration with Schoodic Institute, Downeast Institute, DMR and RSU 24 to test the cost and feasibility for Gouldsboro to grow out baby clams in indoor saltwater tanks before dispersing and protecting them with predator nets in coves and inlets such as John Small Cove off Schieffelin Point and Joy Bay off Gouldsboro Point.
0229656_seaport-village-help-wanted-rerun_300x250House-Wine_300x250_8-06-20

Early this past summer, the shellfish resilience project had been proposed on a ¾-acre, shorefront parcel on Prospect Harbor’s eastern shore, but the town-owned land would have required rezoning from limited residential to commercial fisheries/maritime to permit the clam cultivation. The project also raised concerns among neighboring residents and landowners who supported the project in concept but questioned the Lighthouse Road property’s suitability for the operation. They expressed concern that the tax-acquired parcel was not big enough to create a graded commercial-load driveway with drainage and turn-round for as many as six vehicles. Such a road, they feared, could cause extensive runoff and result in damage to abutters’ properties. They objected to the potential reduction in the narrow woodlot’s trees and vegetation that serve as a buffer against periodic 60-to-70-mph winds and blow-downs. Another issue was the installation of a long intake pipeline across the tidal flats to regularly supply fresh seawater to the shellfish resilience lab’s tank.

Public access to the sea is scarce in coastal Maine towns. As a fallback, in case the Prospect Harbor parcel proved unfeasible, Rice previously had offered his unused building on Bunkers Harbor’s commercial working waterfront. In his capacity as the town’s shellfish warden, Pinkham already has a Maine Department of Environmental Protection permit to run an intake pipe from the wharf-side building into the harbor to draw fresh seawater for two planned recirculating tanks indoors. Rice has donated one of the tanks previously used at the former Tidal Falls lobster pound in Hancock.

Earlier this week, Pinkham, Zoellick and Hooper showed the two-room shed being refurbished over the winter. The interior, which already has foam-insulated walls from the days when clams were kept refrigerated there, will be framed out with stud walls. The space will require rewiring and some form of heat will be installed. Gouldsboro builder Dale Church has been contacted to assess and renovate the structure. Labor, building material and all other costs will be tracked and analyzed as part of the pilot project’s overall goal to determine if such shellfish grow-out sites make practical and economic sense for Gouldsboro and other communities.

Up until now, coastal Maine towns have relied upon the nonprofit Downeast Institute’s shellfish hatchery to supply 100,000 yearling clams at a cost of $2,500. Gouldsboro’s experimental site aims to cut that cost to $800 and eventually raise a greater volume of clams to jumpstart more unproductive flats.

“The reason we got funding is to bring down the cost and labor and maybe become something other towns can do,” Pinkham said. “A lot of municipalities are paying attention to what Gouldsboro is doing.”

At present, Gouldsboro has about 14 commercial clam diggers and several recreational license holders. Their livelihood has been hit hard by the growing incursion of invasive green crabs and ribbon worms as water temperatures continue to rise in the Gulf of Maine.

When the COVID-19 pandemic eases, Pinkham, Zoellick and Hooper plan to re-enlist students from RSU 24’s five schools to help in all aspects of the shellfish lab. They envision youngsters learning to run the lab’s recirculating seawater system, monitor water temperature and shellfish growth and acquire other valuable skills. They see the project as a catalyst for empowering youth as future stewards and stakeholders of their towns’ marine resource.

“There’s work to be done as you learn how to manage these systems,” Zoellick said. “That’s stuff that kids could learn.”