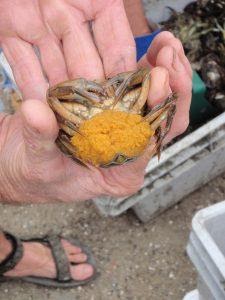 Increases of Temperatures Correspond with Increases in Green Crabs:

Rising Ocean Temperatures are Associated with Higher Levels of Predation on Clams and other species:

Green crabs are biologically suited to warmer waters. Locally, their populations have increased with warming waters, and are expected to continue to rise as ocean temperatures continue to increase. 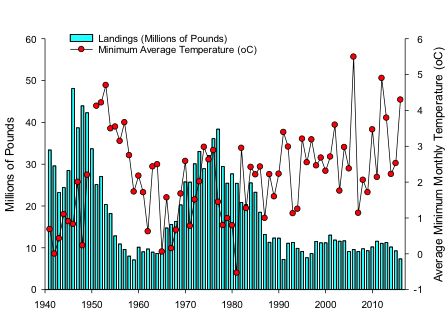 The graph shows the decline of statewide Maine soft-shell cla

m landings along with concurrent rising winter sea surface temperatures in the Gulf of Maine.

Green crabs have been found in southern Maine since 1905-, and should be considered permanent inhabitants of the Gulf of Maine ocean environment. Their numbers won’t decline significantly unless water temperature declines and winters get colder.

Green crabs cause coastal erosion through their burrowing and foraging behavior.

Clammers discovered that the edge of some upper intertidal areas colonized by salt marsh grass, Spartina alterniflora, provides refuge for many green crabs. The crabs burrow into the roots and rhizome structures of the plants and carve out elaborate subterranean burrows and galleries. 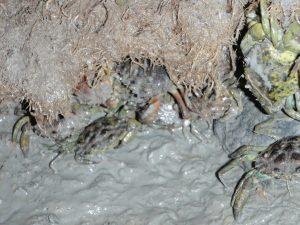 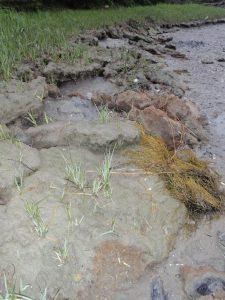 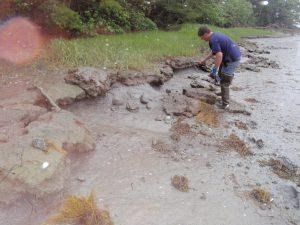 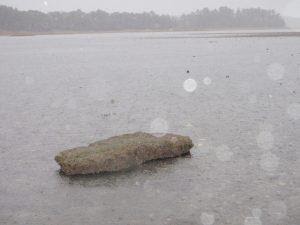 A piece of salt marsh bank on a mudflat near Flying Point, Freeport, Maine (28 June 2013).

Sampling of several shorelines along the Harraseeket River, lower Maquoit Bay, Harpswell Cove, and Johnson Cove on Chebeague Island have shown that the burrows are colonized mostly by female green crabs along with a few large males. Sex ratios in the colonies are typically 8 females:1 male.

As crabs continue to create burrows that kill the underground roots and rhizomes of the marsh grass, seawater enters these burrows daily, and eventually large portions of the bank erode and slough onto the flats. Erosion caused by sea level rise is a major concern for adjacent landowners and municipal planners and will be exacerbated by green crab colonies.