Investigation into the Cause of the Clam Decline: 2018

In 2018 we conducted 2 experiments at three locations. We continued to investigate if clams settle gregariously. If it is found that adult clams do attract settling juveniles, planting adult clams could be a way to locally enhance clam populations. We also continued to build a database about the number of clam recruits settling in the Harraseeket River of Freeport, and their growth through the year, as well as the amount of recruits that survive the summer.

In order to ensure as much confidence in our results as possible, experiments were designed to be statistically valid. The details, experimental design and results can be found below.

In 2014, 2017 and 2018 DEI scientists, in partnership with the Maine Clammers Association, conducted field experiments to determine if wild clams settle and recruit to the mudflats gregariously.  Many marine invertebrates settle gregariously near their own kind, especially adults.  This has been shown in barnacles, ascidians (sea squirts), tubeworms, oysters and other bivalves, but has not been shown definitively in soft-shell clams. 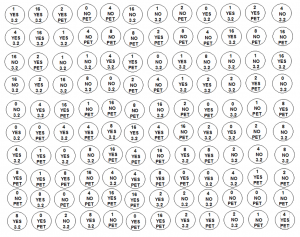 In 2018, we used the same design as the previous year. This means we used 8-in diameter x 6-in deep plastic plant pots as experimental units (EU). These were dug into the mud so that they provided bottom and side protection to the adult clams inside. Milky ribbon worm protection, in the form of window screen, was added to half the EUs. Unlike last year, this time the window screen was hot glued to the bottom of half the plant pots to stop the milky ribbon worms from penetrating the EU.  The remaining half received no protection against milky ribbon worms.

We deployed the 240 plant pots in May, with half being placed in Spar Cove and half at Recompense Flat. Ambient sediment was placed in the pots. Each pot was protected from the top with a piece of mesh netting. Adult clams were planted in six different densities: 0, 1, 2, 4, 8, 16. We used 1,240 adult clams, sized 50-65 mm SL for this experiment.

#2: Measuring clam recruitment and survival in the Harraseeket River

Continuing to measure clam recruitment and survival in the Harraseeket River