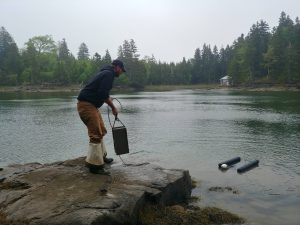 Deploying an oyster bag in a pound in Addison.

Over the course of the summer of 2020, DEI conducted a pilot study to determine whether it is possible to grow oysters and other shellfish in unused Downeast region lobster pounds. Cold water temperatures in Washington and Hancock counties have prevented the development of a commercial oyster industry because oysters typically mature 2-3 times slower in cold water than in the warmer waters of southern and midcoast Maine. Wild oysters are not yet seen east of Frenchman’s Bay.

The study measured water temperatures and oyster growth rates within 13 pounds between Beals and Deer Isle from June to November 2020.  Floating oyster bags containing a HOBO temperature logger and 100 American oyster seeds with an average shell length of 7.5 mm were deployed. Where possible, unseeded bags were placed outside the pounds to compare the pound temperature with the outside seawater temperature.

This study shows promise for farming oysters and other shellfish Downeast, which could provide an opportunity to diversify local economies.

This work was funded by: