Stockton Harbor was once a very productive clamming area in the State of Maine. Today, however, no commercial clamming occurs in this region. In 2007, in an effort to stimulate the local economy, the towns of Stockton Springs and Searsport sought information about how to return the towns’ flats to their previous condition.

DEI received a small grant from the Town of Stockton Springs to design and execute field experiments to learn if there are methods of attracting juvenile soft-shell clams to discrete areas of the intertidal zone. This research was very important because, prior to this, few studies had been conducted to determine the factors that affect successful recruitment to a particular area. Two studies were set up in an attempt to determine the possibility of influencing this critical stage of the clam life cycle. Specifically, experiments were designed to learn if 1) the presence of adult clams would attract settling juvenile clams (i.e. if clams settle gregariously) and 2) if deterring predators, such as crabs and bottom-feeding fish, would enhance clam populations.

Results from both experiments were consistent with observations and unpublished data from field experiments conducted by the town of Searsport during 2005-2006 on tidal flats approximately 3 km from DEI’s study site. All provide strong evidence that predation by the milky ribbon worm, Cerebratulus lacteus, and the green crab, Carcinus maenas, is preventing commercial densities of clams in the Stockton Harbor area.

See information about DEI’s later investigations into possible gregarious settlement of clams, which was also thwarted by milky ribbon worms.

In order to ensure as much confidence in our results as possible, experiments were designed to be statistically valid.  The details, experimental design, and results can be found below.

In mid-July 2007, Dr. Brian Beal, DEI’s Director of Research, and students from UMM set up two field experiments at a site on the northern side of Stockton Harbor. 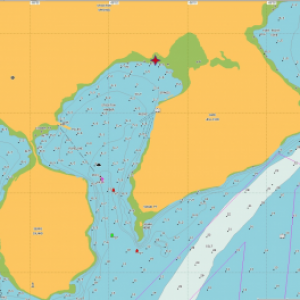 Star shows location of both study sites in Stockton Springs, ME.

The experimental area was located near the low watermark, and was partitioned into two 50 m2 plots approximately 10m apart, one each on the eastern and western sides of the cove.

Experiment #1 was conducted on the east side of the cove and included a series of large (22.3 m2) plots that were randomly assigned one of four treatments:

1) no clams with no predator protection netting;

2) one bushel of commercial size clams and no predator protection netting;

3) no clams and netting;

4) one bushel of clams and netting. 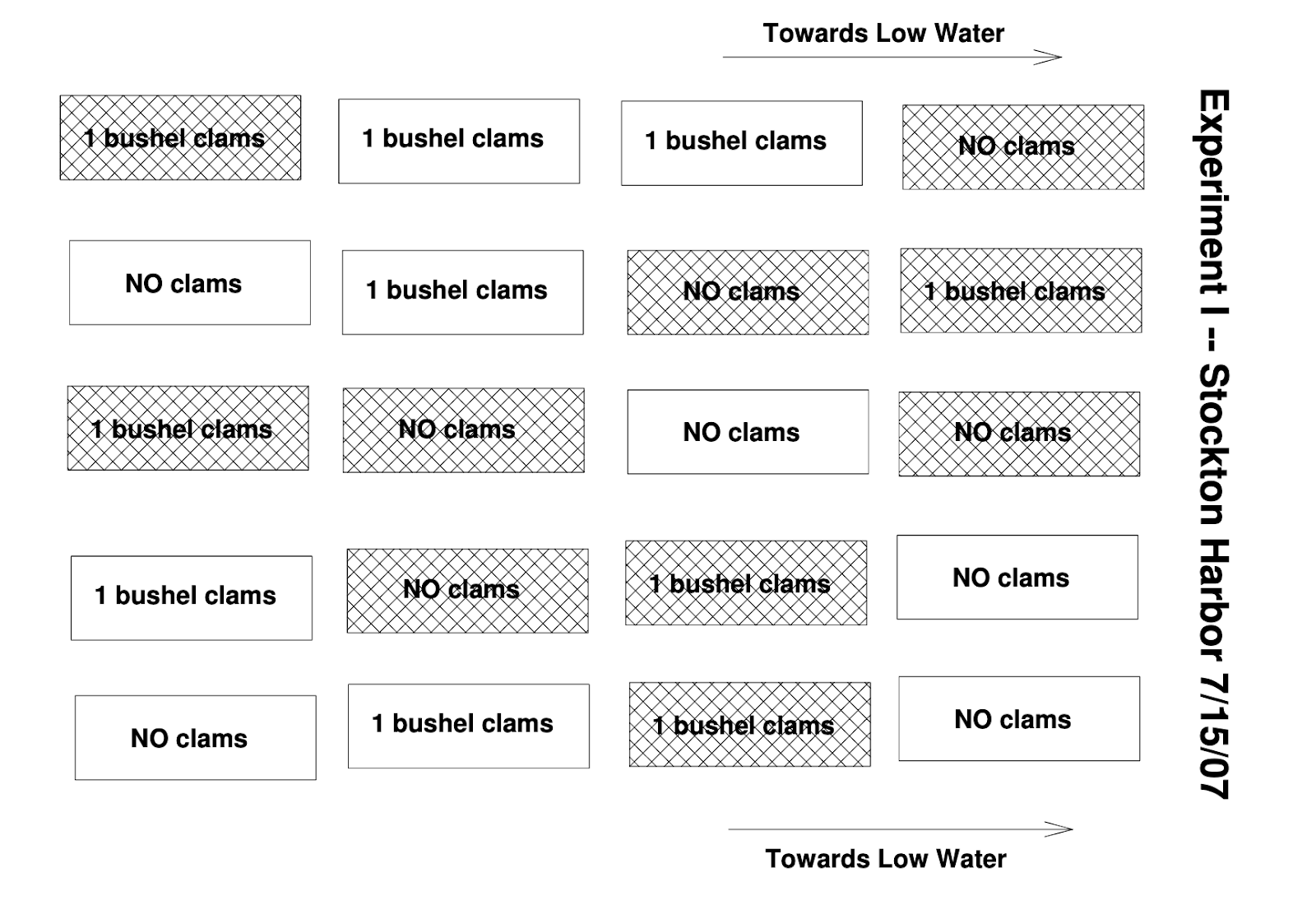 Experiment  #2 was conducted on the western side of the cove, and used a series of 1-m2 plots that were randomly assigned six treatments:

1) no clams with no netting;

3) no clams with netting;

5) one hundred clams with netting; 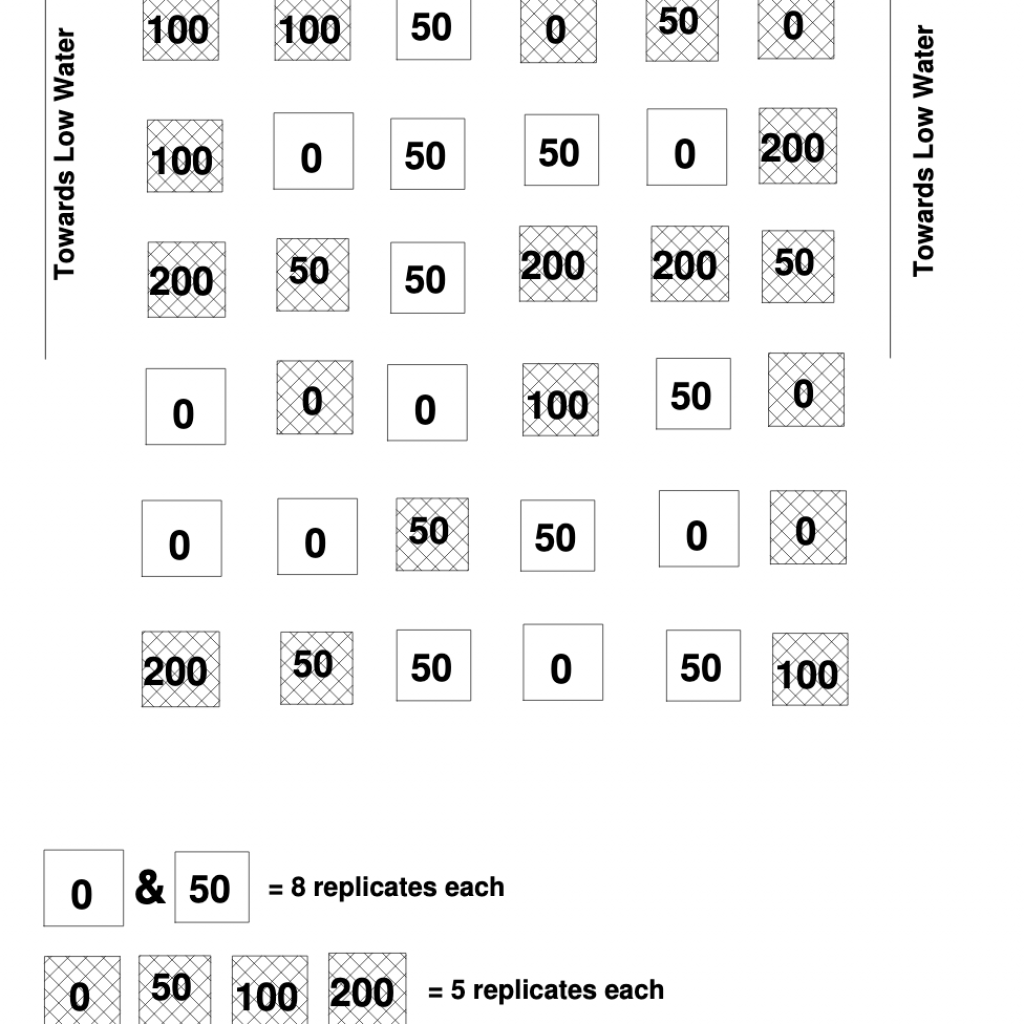 Both experiments were conducted from mid-July until the end of October (approximately 100 days).  Results were determined by collecting samples from plots in each experiment (Experiment #1 = 100 samples, Experiment #2= 180) and counting and measuring the juvenile clams  (< 15 mm shell length, SL).

Results from Experiment I revealed that the presence of adult clams (stocking density ca. 34 individuals/m2) had no appreciable effect on juvenile clam spat that either settled into the plots or moved in after the experiment was established. Netting, on the other hand, enhanced juvenile clam densities nearly seven-fold from 132.9 to 974.7  ind./m-2 in plots without netting vs. plots with predator- deterrent netting. A higher proportion of clams larger than 9 mm occurred in plots protected with netting vs. those without netting. Among netted plots, there was a significant difference in clam size-frequency distribution, due to the presence of adult clams.

Data collected throughout the experiment revealed that predation by green crabs and milky ribbon worms is heavy during the summer and early fall. In these experiments, it was found that green crabs prey on young-of-the-year recruits and that milky ribbon worms prey on larger-size clams (ca. > 25 mm SL). The combined effect of these predators makes it difficult to recommend a particular management strategy with the goal of increasing clams harvests. Results from these experiments, combined with recent observations on flats in Searsport and past studies in Castine and Rockport, suggest that milky ribbon worms play a major role in limiting commercial populations of clams on flats. 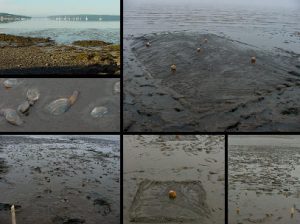 Top left: Study site on the north side of Stockton Harbor. (Stockton Springs public landing is in the background.)

Upper right: A 20-ft x 14-ft plot with netting (1/4-inch aperture). It is difficult for clams to extend their siphons up through the netting to feed effectively.  Therefore, five Styrofoam floats were affixed to the underside of each net, allowing the nets to rise up in the water column during periods of tidal inundation to reduce their interaction with the clams in the plots.  (Experiment I)

Lower left: A 20-ft x 14-ft control plot with clams. One bushel of commercial size clams was broadcast onto the muddy surface.  The majority of clams dug themselves into the mud within 24 hours. (Experiment I)

Lower middle: One-square-meter netted plot with Styrofoam toggle. In Experiment II, commercial size clams were planted in netted plots at densities of 0, 50, 100, and 200.  Control plots (without netting) were also used for two of the four densities (0 and 50).  October sampling revealed if clam density and/or the presence/absence of netting had an effect on the presence and size of wild soft-shell clam seed.

Lower right: A series of 1-square-meter-control plots marked in each corner with a small, wooden lath.