From November 2001 to December 2006, DEI and the University of Maine at Machias examined the reasons for high mortality of soft-shell clam juveniles in the Hampton Harbor region and the possibility of enhancing recreational flats in that area with hatchery-reared soft-shell clam seed.

Two series of tests were conducted, the first from November 2001 to July 2002. Our tests ruled out disease and winterkill as significant contributors to the lack of wild soft-shell clam seed.  Instead, most clam losses were caused by predators (mostly the green crab) and sediment scouring (see Final Report).  The second study, conducted from November 2004 to November 2006, examined the interactive effects of predator exclusion netting, netting aperture size, and planting area on clam growth and survival.  Clam survival was not affected by the planting area (4 m2 x 18 m2), and enhancement was 100x more successful in plots surrounded by predator-deterrent netting than in plots with no netting.   A strategy for enhancing flats in the Hampton-Seabrook Estuary was presented and a demonstration enhancement project with clammers was developed (see Final Report). Project funding was provided by the New Hampshire Estuaries Project. 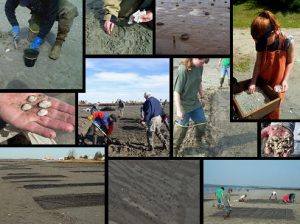 Upper tier of four photos: In the first study, hatchery seed was planted in six-inch diameter plastic plant pots that were placed level with the sandy sediment surface at each of three flats near Hampton Harbor.  Clam density (330, 660, and 1320 per m2) and predator netting (present vs. absent) were varied at each site.  At the end of the trial, the contents of each pot were sieved through a 1-mm mesh and the number and sizes of the clams recorded.

Middle tier of four photos: Hatchery-reared clams produce a distinct disturbance ring at the time of planting.  The ring enables researchers to determine the growth rate of surviving individuals without physically marking the animals.  Here, clams have nearly doubled in size during the field trial.  Placing large nets on- sandy flats is challenging work because a deep furrow must be dug around the perimeter of the seeded area.  Staff and clammers used clam hoes, as well as shovels, to complete the work.  Once the net is placed over the seed clams, the edge of the net must be buried by filling in the furrow with the sediment. In this photo, planters are using their feet to accomplish this task. The seed produced at DEI for this experiment ranged in size from 8 to 12 mm in shell length.

Lower left: An experiment at The Willows flat (Hampton, New Hampshire) to examine the effect of planting area on clam growth and survival.

Lower right: Nets being placed around plots of seeded clams in June 2005 at The Willows flat.