DEI staff and area biologists teamed up over the summer and fall of 2014 and 2015 to conduct a series of comparative, large-scale manipulative experiments at six intertidal mudflats in three geographically distinct coastal regions to examine potential management tools for flats closed for conservation purposes.

The studies, which took place at two flats in Jonesboro, two flats in Boothbay, and one each in  St. George and South Thomaston, were conducted to examine potential management tools for areas closed for conservation purposes that would increase clam harvests. Specifically, the studies examined how the use of plastic predator-deterrent netting (4.2- or 6.4-mm aperture) enhanced: (1) recruitment of 0-class juveniles, (2) survival of 1-year class or greater wild juveniles, and (3) wild stocks using cultured juveniles.

In order to ensure as much confidence in our results as possible, experiments were designed to be statistically valid.  Details about experimental design and results can be found below.

Click here to see Dr. Brian Beal’s 2015 Fishermen’s Forum presentation about this work. This presentation details the six flats the experiments took place in, the experimental design, results of initial baseline clam density and size sampling conducted at each of the six flats, pictures from deployment, final sampling/processing, and results by location. Final sampling took place at the end of October 2014.

Further information about the 2014 experiments can be found in this final report.

Details about the 2015 experiments, including design, sampling, and results can be found here.

These 12 field trials revealed that: 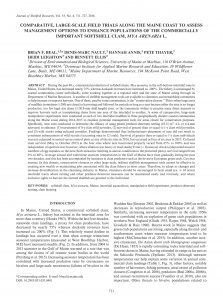 Average annual and wintertime seawater temperatures in the Gulf of Maine have risen gradually during the past two decades, and the warming has been accompanied by increases in clam predators such as the invasive European green crab, Carcinus maenas. Due to the increases in predation and the expected continuation of the warming trend, conservation closures or other large-scale, indirect shellfish management tools cannot be effective in creating new wealth or maintaining jobs associated with the clam fishery in most areas. Therefore, to adapt to changes and increase diversification in the clamming industry in Maine, clammers should be encouraged to protect small (ca. 10 acres) intertidal tracts with netting and other predator-deterrent measures. These smaller tracts of mudflats are easier to routinely maintain than an entire mudflat.

The results of both years of experiments were published in the Journal of Shellfish Research in 2016.