In February 2006, the Maine Technology Institute funded a request by DEI to examine the hatchery, nursery, and overwintering phases of quahogs (hard clams). Typically, this species of clam is associated with a geographic region that stretches from Florida to southern Maine. There is, however, a small commercial population of hard clams in Frenchmen’s Bay in Hancock County. A clammer from Blue Hill, Mr. Joseph Porada, contacted DEI in December 2005 saying he wanted to pursue a quahog farming venture in Goose Cove in the town of Trenton. In its first business incubator project, the Institute helped Mr. Porada obtain three 2-acre experimental leases for the purposes of farming hard clams.

During the winter of 2006, DEI conditioned quahog broodstock from Goose Cove to spawn earlier than normal. DEI accomplished this by growing cultured algae and feeding it to the broodstock over a 2-month period. To do so the quahogs were sandwiched between pieces of rigid netting and placed into tanks of seawater maintained at 70oF from February to April. Then, animals were stimulated to spawn.

DEI staff raised the swimming larvae for 2 weeks in large tanks and then reared the juveniles to a size of approximately 2 millimeters.

Once the juveniles reached 2 mm, DEI staff transferred them to wooden trays lined with window screening and took them to DEI’s ocean grow-out site at Mud Hole Cove on Great Wass Island. 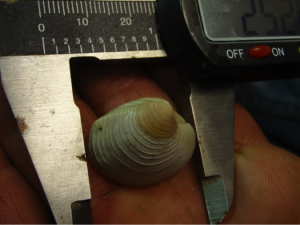 A quahog showing a distinct disturbance line, aka hatchery mark. 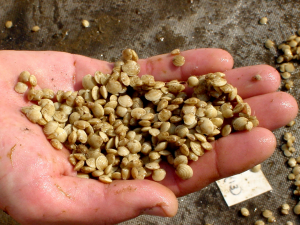 An experiment was designed to examine the effect of stocking density on hard clam growth and survival. Using a total of 80 trays, staff filled 20 trays each with 2,500, 5,000, 7,500 and 10,000 seed clams. The trays were at Mud Hole Cove from July through mid-November. 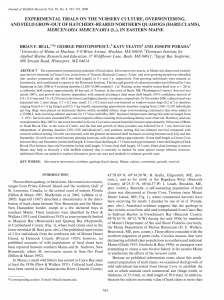 Over four and a half months, by mid-November quahogs at the grow-out site were able to reach an average size of 8mm. This is a 6mm increase.

At the end of the growing season DEI discovered that cultured hard clams lay down a disturbance line when transferred from the hatchery to the field, much like cultured soft-shell clams do. This makes it easy to measure how much the clam has grown through the season.

It was found that stocking density did influence final size. Animals held at the lower densities (2,500 and 5,000 per tray) were slightly larger than those held at the higher densities. Survival was nearly 100%.

This research was published in the Journal of Shellfish Research.