Through funding from the Maine DMR, DEI undertook a study to determine how fast lobsters grow and whether their growth is influenced by region and/or the type of substrate on which they settle. The variables include bottom type (soft vs. hard), substrate type (crushed shell vs. no shell), and container size (container size (3.3 L w/ bottom surface area of 308 cm2 vs. 4.2 L w/ bottom surface area of 230 cm2). The containers represented new methodology for holding lobsters in the field (Beal et al. 2002). 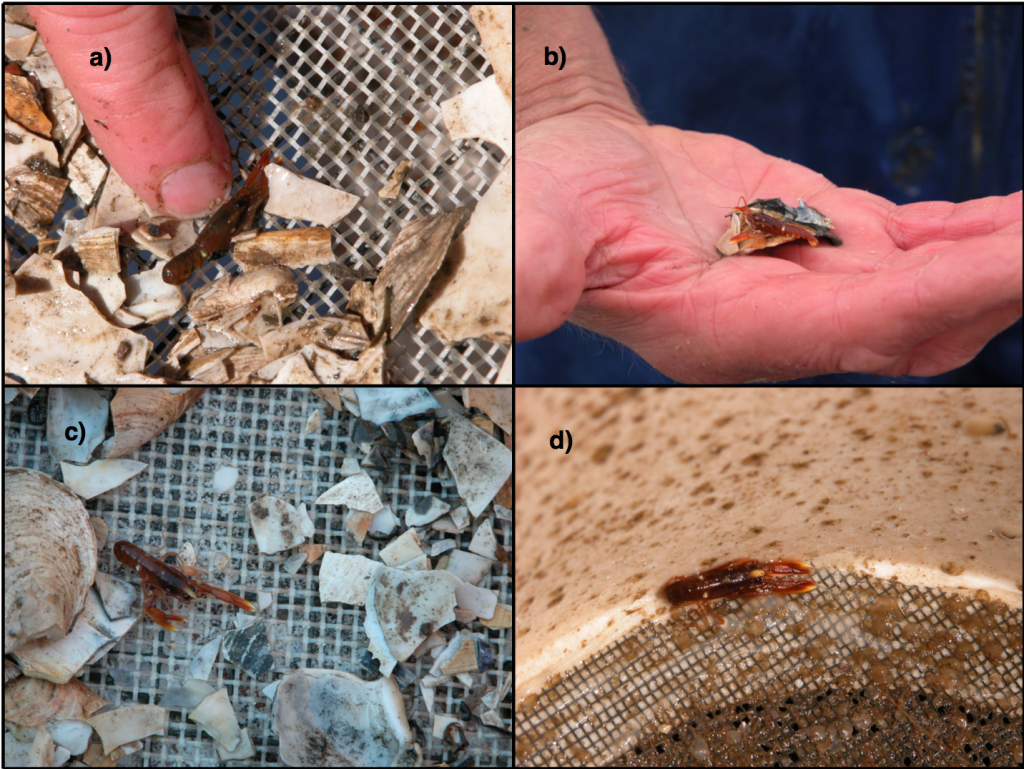 Photographs of lobsters taken during the first sampling in October 2006 from a) Beals; b) York; c) Tenants Harbor; and, d) Stonington. (See Table 2 for specific sampling dates.) Mesh size in photographs a) and c) is 2 mm. Window screening is seen in photograph d) (ca. 1.8 mm aperture).

This research built on Dr. Beal’s work with ocean-based lobster nurseries, which he developed and tested in Maine and as a 2000 Fulbright scholar at the National University of Ireland Galway’s Shellfish Research Laboratory.

In July 2006, egg-bearing female lobsters at DEI’s hatchery produced approximately 4,000 larval lobsters. Hatchery staff fed the tiny cannibals on brine shrimp until they grew to the diameter of a penny.  Each juvenile was then placed in a specially designed flow-through container, which were then placed in wire cages. Dr. Beal and hatchery staff worked with area lobstermen to deploy the cages at ocean sites in York, Boothbay Harbor, Tenants Harbor, Stonington, Beals, and Cutler. 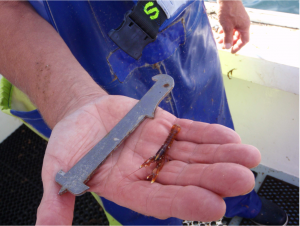 The cages were pulled up at regular intervals and the lobsters are measured.

In addition Dr. Sean Grace at the University of Southern Connecticut examined the accumulation of lipofuscin from the olfactory lobe cell mass in the brain of all live lobsters.  Lipofuscin is a pigment that accumulates in lobsters and other organisms at a rate that is related to the age of the animal.

Collectively, Drs. Grace and Beal provided the DMR with two, independent measures of the age of lobsters.

Read the report: Spatial variation in growth and survival of juveniles of the American lobster, Homarus americanus, along the Maine coast.