Historically, stock enhancement programs for American lobster, Homarus americanus, have a common theme: production and release of large numbers of stage IV or stage V individuals. However, these animals are difficult to mark, highly mobile when released on the bottom, susceptible to a wide array of predators, and their claws have yet to develop bilateral asymmetry. Many of these attributes make it difficult to test the efficacy of hatch-and-release efforts.

It is possible to hold postlarval lobsters individually in the laboratory or hatchery and provide food regularly for several months to release older, larger individuals (as with enhancement efforts in Europe with Homarus gammarus). However, the costs to do so compared with the value of commercial-size animals makes this practice cost prohibitive.

DEI attempted to reduce costs of rearing early postlarvae to larger sizes in ocean-based nursery cages in eastern Maine for periods of longer than 1 year. The results found in variable survival (in general, <50%) and slow growth (doubling in carapace length (CL) from 4.2–8.9 mm) (see here and here for more information about those studies).

From 2004-2010 DEI conducted a series of field trials to examine methods to improve survival rates and enhance growth with the goal of producing animals large enough to apply a physical tag that can be seen easily by fishermen and scientists interested in testing directly the efficacy of enhancement efforts.

The effect of flow rates into and out of various types of containers (350 mL and 440 mL) holding individual, cultured stage IV lobsters was examined experimentally during a 309-day period from August 2004 to July 2005 in off-bottom, ocean-based nursery cages deployed in shallow (12 m) water near Great Wass Island, Beals, ME. It was found that mean survival rate varied directly with flow as animals in containers with the greatest exchange of seawater demonstrated survival rates of ca. 90% compared with ca. 30% in containers allowing lower flow rates. Sediment deposition in the low-flow rate containers tended to be high, and was associated with significantly lower mean lobster survival.

Our results found that rearing cultured individuals of American lobster to large sizes in ocean based nursery cages may provide managers of stock enhancement programs with a more viable assessment tool than those used traditionally. The results of this work was published in the Journal of Shellfish Research in 2012, and can be found here.

The experiments conducted after 2004 focused on the effects of flow rates on lobster survival. 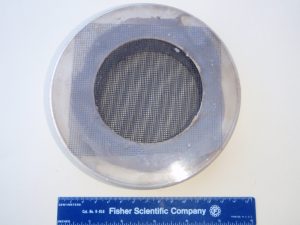 Left: A 3 1/2-inch hole was cut in both the top and bottom of a 6-inch diameter Petri dish, and pieces of nylon window screening were used to cover the holes so that a stage IV lobster would be retained within the dish. Screening was affixed to the polycarbonate Petri dish with PVC cement. Flow rates within dishes with the large hole and window screening were approximately five times greater than rates associated with Petri dishes with 50 holes (1/8th inch) drilled in them. 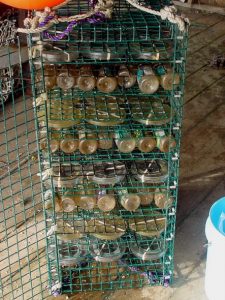 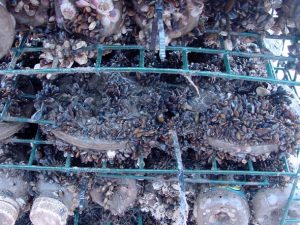 Extreme Fouling of Gear. Although fouling over the 309-day experimental period was intense (see the juvenile blue mussels, jingle shells, and barnacles), overall survival varied significantly among the treatments with 30% in the bottles (regardless whether they had 25 or 50 holes), 75% in the Petri dishes with fifty holes, and 91% in the dishes with the large hole covered by window screening. 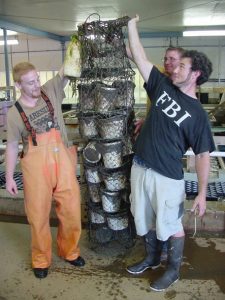 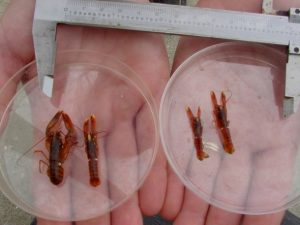 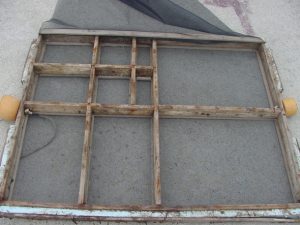 Experiment #2- Measuring container size and growth: To get a better idea of whether lobster growth truly was related to container size, we constructed wooden trays, and then created 10 partitions within each tray (2 replicates of each of five partition sizes). The smallest area is similar in size to the 6-inch x 1-inch Petri dish, with a volume of about 440 mL, and the largest area has a volume of approximately 20 L. One lobster was added to each compartment, and then the trays were situated in the middle of the water column in Mud Hole Cove from August 12, 2009 to October 5, 2010 (419 days).

Amazingly, lobsters grew nearly perfectly with the size of their container. 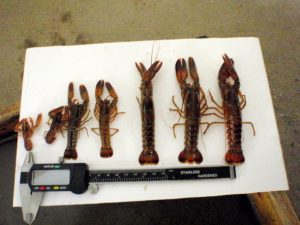 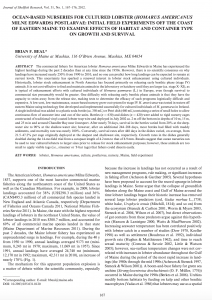 Results were published in the Journal of Shellfish Research. Results suggest that ocean nurseries can be used to rear cultured lobsters to larger sizes prior to release for stock enhancement purposes; however, these animals are too small to apply visible tags (i.e., streamer or T-bar tags) that fishermen could discern easily.