The commercial fishery for American lobster in Maine has experienced the highest landings during the past 2 decades than at any time since the 1950s. However, there is no scientific consensus on why landings have increased nearly 250% from 1990 to 2010, and no one can predict how long landings can be expected to remain at current levels. This uncertainty has sparked a renewed interest in lobster stock enhancement using cultured lobsters.

Historically, lobster stock enhancement in North America has focused primarily on releasing early benthic phase (stage IV) animals. It is not cost-effective to feed and maintain animals in the laboratory or hatchery until they are larger (ca. stage X–XI), as is typical of enhancement efforts with cultured individuals of Homarus gammarus (L.) in Europe, even though survival to commercial size presumably would be greater. One difficulty with releasing early benthic phase animals is that they have the capacity to swim away from the release site, making tests to determine the efficacy of such programs logistically difficult and expensive. 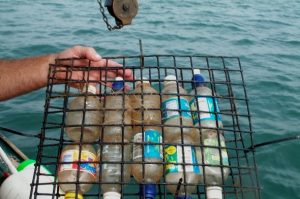 Plastic soda bottles with holes punched in them contain one lobster each. Groups of ten bottles were sandwiched between two pieces of vinyl-coated lobster trap wire, and then the group of bottles placed onto a shelf in the nursery cage.

A low-cost, low-maintenance, ocean-based nursery grow-out system for stage IV H. americanus was tested in waters off eastern Maine using technology first developed and implemented successfully for cultured individuals of H. gammarus in Ireland.  A single individual was added to a plastic soda bottle (ca. 350 mL) or Petri dish (440 mL) containing a series of small holes to allow continuous flow of seawater into and out of the units. Bottles (n = 630) and dishes (n = 420) were added to rigid nursery cages constructed of traditional vinyl-coated lobster trap wire and deployed in July 2002 ca. 2 m off the bottom in depths of 10 m, 15 m, and 25 m in and around Chandler Bay near Jonesport. 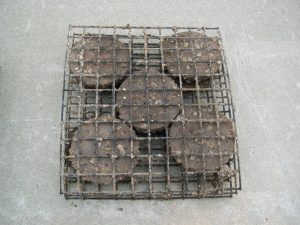 These are large Petri dishes (6-inches diameter x 1-inch deep) with holes that have been in the field during the fall/winter of 2002-2003. Each was initially “seeded” with a stage IV lobster. There are ten of them in two stacks (an upper and lower stack). Five top dishes are stacked underneath five bottom dishes with vinyl-coated trap wire separating the two groups of five dishes. The unit is held together with nylon cable ties. The entire unit of ten dishes was placed on one shelf in a nursery cage.

After nearly 70 days, survival in the bottles varied from 20% at the deepwater site to 90% at the shallow-water site; however, after an additional 244–288 days, most bottles had filled with muddy sediments, and mortality rate was nearly 100%. Conversely, survival rates after 448 days in the dishes varied, on average, from 21.5–47.2% per cage originally deployed at the deepest and shallowest site, respectively. Growth rates in the dishes generally doubled during the 14-mo field trial from a carapace length of 4.2 mm to that of 8.9 mm.

Results suggest that ocean nurseries can be used to rear cultured lobsters to larger sizes prior to release for stock enhancement purposes; however, these animals are too small to apply visible tags (i.e., streamer or T-bar tags) that fishermen could discern easily. 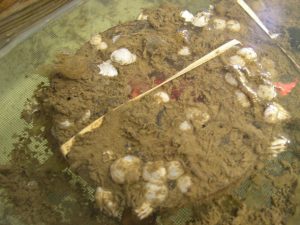 This is a Petri dish that was part of a stack of 10 dishes in a nursery cage in waters off Jonesport, Maine for 448 days from July 31, 2002 to October 22, 2003. The lobster inside is alive; however, it grew very little over the experimental period, only doubling in size.

This research was published in 2012 in the Journal of Shellfish Research. Read the entire paper here.