In August 2013, the University of Maine at Machias received a 2-yr, $630,000 grant from the National Science Foundation to conduct applied research on both Blue mussels, Mytilus edulis, and Arctic surfclams, Mactromeris polynyma. Read about DEI’s the Phase I Arctic Surf clam research here. DEI is collaborating with the University of Connecticut, Maine Aquaculture Innovation Center and Pemaquid Oyster.  We also partnered with a company called New DHC, related to Cooke Aquaculture, the largest producer of farmed salmon in the United States, to grow mussel seed in fallowing salmon pens at sites in Eastport, Machiasport, and Beals.

We sought to answer the following questions:

Left: Ropes were stretched in a PVC frame that was placed into a 2,000 L settlement tank. Middle: Four different rope types were tested to see which one(s) mussels settled on most densely. Right: mussels are settled onto a polypropylene, smooth rope (animals are ca. 1 mm in shell length).

Question #2: How should ropes that mussel larvae settle onto be configured in culture tanks at DEI?

Question #3:  How large should mussels be upon leaving DEI to optimize juvenile growth and survival in the field (rafts and salmon pens)?

Above: Frames with mussel-laden ropes loaded onto a boat that will take them to an unoccupied salmon pen in lower Machias Bay (July 2013).

Question #4: What is the optimum juvenile mussel density per section of rope needed to maximize growth and survival in the field? 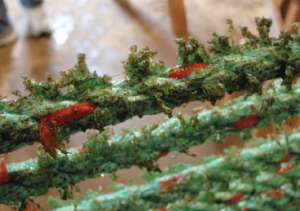 Left: PVC frames containing ropes with settled mussel juveniles are within salmon pens in Machiasport, Maine. Right:Two months after deployment, many mussels have fallen off these ropes (October, 2013; Machiasport, Maine).

Question #6:  Can broodstock be conditioned throughout the year to obtain viable larvae and pediveligers?

Left: A female blue mussel that is spawning. Right: a male mussel is releasing sperm that will be used to fertilize the eggs from one or more females.

Broodstock animals are held at seawater temperatures of 13-15° Celsius, then they are placed into seawater that is 22-24° Celsius, and this thermal shock will stimulate them to spawn if they are conditioned properly.

Question #8:  Does time of year when seeded ropes are transferred to the field (March/May/July) result in different survival and/or growth trajectories?

Left: These mussels are between 1 and 2 mm in length, and are ready for deployment to a salmon pen in Eastern Bay, Beals. Right: Mussels from the same ropes after two months. 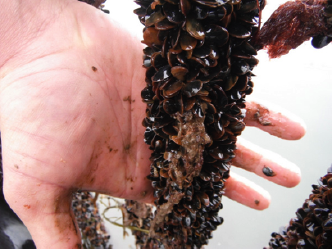 Question #9:  What is the minimum size a seed mussel can be socked, and what time of year should this process be initiated?

Photo credits: Many photos on this page were taken by Kyle Pepperman.