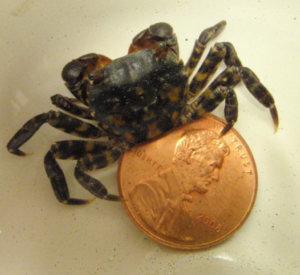 On Tuesday, September 24, 2013, students in the Marine Ecology class at the University of Maine at Machias discovered an Asian Shore Crab. This was the northern and easternmost record of this invasive species that has been in the U.S. since at least 1988. It was discovered near the upper intertidal under rocks that were covered with rockweed, Ascophyllum nodosum, during a field lab in which densities of mussels, periwinkles, and green crabs were being assessed quantitatively.  The individual was a male that measured 13.03 mm in carapace width.  Read about the story from this The Bangor Daily News article by Tim Cox.  Read more about this invasive species at the National Invasive Species Information Center.

In addition, another male Asian Shore Crab was discovered in May 2014 by students at the Beals Elementary School in Mr. George Crawford’s 7th-8th grade science class.  Again, this was a single individual, and none have been discovered since that time. 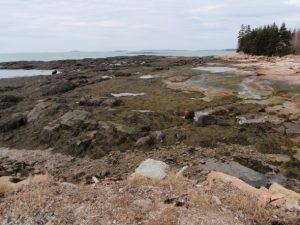 The crab was found near the upper intertidal along the shore near DEI under rocks covered with Ascophyllum nodosum.