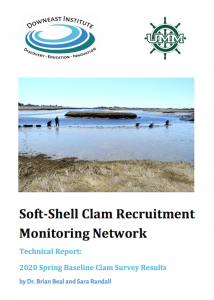 The results of soft-shell clam surveys conducted at eighteen flats across all three regions of the Maine coast were released in a report by the Downeast Institute (DEI) today. The surveys provide local and regional snapshots of clam densities and average sizes. Scientists will use the baseline information to better understand fishery biomass trends.

The surveys were done during early May as part of the new Clam Recruitment Monitoring Network which involves local clammers and community members from nine Maine towns in working with DEI to monitor natural clam settlement and survival.

“Our next step is to measure how many juvenile clams settle to the mudflats this season on these same flats,” said Sara Randall, the Co-PI of the network. “The survey data will help us interpret information about clam settlement and survival levels at our monitoring sites along the Maine coast.”

The Clam Recruitment Monitoring Network standardizes clam recruitment measurement efforts across the coast and builds a comprehensive data set that communities can apply to the management of shellfish resources in a changing climate. Read the report.

More information about the Clam Recruitment Monitoring Network can be found here.