Freeport, ME —Spreading clam and oyster shells on the mudflats in an effort to counteract the effects of coastal acidification does not increase numbers of juvenile clams and quahogs, according to results from three years of field experiments led by researchers at the Downeast Institute and the University of Maine at Machias. The research, which will be published in the September/October issue of the Journal of Experimental Marine Biology and Ecology, was conducted in collaboration with members of the Maine Clammers Association, who are co-authors of the article. 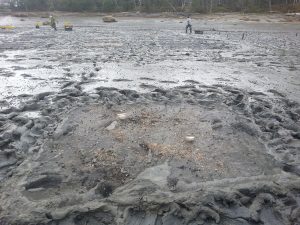 Eight independent experiments compared the combined effects of sediment buffering and predator exclusion on the number and size of juvenile soft-shell clams and quahogs settling from the water, and then surviving for 5-6 months in field plots. Results suggest that deterring predators from eating recently settled bivalves is a more effective tool to enhance clam and quahog recruits than returning crushed shells to intertidal sediments.

Studies were conducted at mudflats with relatively acidic mud that had historically been productive clamming areas but with little commercial activity in recent years. “In none of the experiments did adding shells to buffer acidic sediments result in more clam or quahog recruits”, said Dr. Brian Beal, University of Maine professor and Director of Research at the Downeast Institute (DEI). “Instead, we found significantly greater density and size of both bivalve species when the treatment excluded predators, regardless of whether the sediment was buffered.” 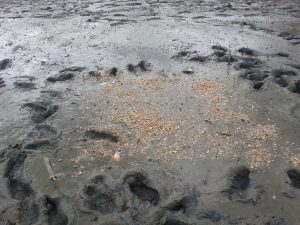 A plot with 26 lbs of crushed clam shells and no predator protective netting.

“As a clammer, I’m excited about how the discoveries made through this field research have enhanced our understanding of Maine’s shellfish resources,” said Chad Coffin, president of the Maine Clammers Association (MCA). “Fisheries managers can now focus on enhancing clam populations by protecting clams from predators.”

Bivalve shells are primarily composed of calcium carbonate, a chemical compound that has the ability to buffer low pH. Concerns about the impacts of ocean acidification on shellfish led scientists and policymakers to identify the practice of adding calcium carbonate, in the form of crushed bivalve shells, to the surface of acidic mudflats as a potential strategy to offset the corrosive effects of reduced pH and enhance clam populations.

“Despite the acidity in surface sediments at each site, our research found that both clams and quahogs settled, survived, and grew by producing shell in corrosive sediments,” reported Dr. Beal. “In addition, in two of the field trials the sediments under nets were more acidic regardless of the amount of shell hash present; however, these plots and experimental units contained 10–70 times more clam recruits and nearly twice as many quahog recruits than in samples from unnetted, or open, controls.”

Clam landings have declined over the past 40 years, during the same time period when seawater temperatures in the Gulf of Maine have risen substantially. During this warming period, populations of invasive green crabs have increased rapidly. Previous research conducted by DEI, UMM and MCA found that over 99% of clam recruits are being eaten before they reach one-year-old.

“Given the findings of this set of research experiments and others, it makes more sense for fisheries managers to focus attention on mitigating effects of predators instead of spreading shell hash to buffer intertidal sediments,” said Beal.

“The clamming industry is now equipped with information needed to sustain and enhance clam populations in a dramatically warming marine environment,” said Coffin. “Hopefully, these results will be applied and help us adapt, reversing the trend of fewer clams and lower landings.”

The journal article can be found here. Further information regarding the 2014, 2015, and 2016 studies can be found on the Downeast Institute website.