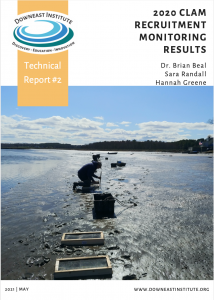 Comprehensive information about clam settlement across Maine’s mudflats in 2020 has been released in a Technical Report.

Overall, researchers found lower than expected average juvenile clam densities inside the predator-protected Beal boxes at the 18 monitoring sites. Eight of the eighteen sites had average clam densities of less than 10 clams per sq. ft. Only three sites recorded average clam recruit densities of over 100 clams per sq. ft. (Winnock Neck in Scarborough, Dobbins Island in Beals, and Gleason Cove in Sipayik). At Gleason Cove we found a single recruitment box with 4,331 recruits, the second highest number of clams ever recorded in a single box. Gleason Cove received more than 1,000 recruits per sq. ft.

The report also details the average growth of the clams that settled into the boxes, results from fall surveys which indicate the juvenile clam survival rate, and the number, location and size of green crabs found at the sites.

A summary can be found HERE.