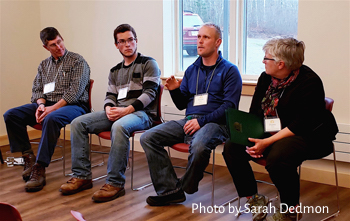 Chris Barlett of Maine Sea Grant, fishermen Elijah Brice and Jeremy Cates, and Downeast Institute Executive Director Diane Tilton were panelists in the “Future of our Fisheries” discussion held in Trescott in November. The panel was one part of the Sunrise County Economic Summit. Photo by Sarah Craighead Dedmon.

Fisheries have always been an economic staple of the Downeast economy, so there was no question they would figure prominently in the first Sunrise County Economic Summit convened in a decade.

The November 2019 event was sponsored by the Sunrise County Economic Council (SCEC) as a way to spur dialogue about issues facing Washington County, and for the SCEC to take the community’s pulse before designing its next five-year strategic plan.

The SCEC is the backbone organization for the Downeast Fisheries Partnership, and it was DFP Director Bob Wood who moderated the “Future of our Fisheries” panel. The DFP is now five years old and comprised of educational, scientific and municipal institutions working toward rejuvenated fisheries Downeast. Wood said finding a balance that honors the region’s heritage, protects its resources and builds its economy is especially challenging today.

“Historically, you’ve always had to keep your eye out for how things might change, but in this era when we worry about climate change and when the economic system is changing so fast, we really have to keep both our eyes open,” said Wood. “We have to look to the future and we have to be able to anticipate what might happen, so folks can be resilient and adaptive.”

Literature handed out before the discussion highlights some of Washington County’s key fishery challenges: a near-singular dependence on the lobster fishery, invasive species like the green crab, declining softshell clam landings, equitable fisheries management and access, and the sometimes-troubled coexistence of wild fisheries and aquaculture.

Perspectives shared by the two fishermen on the panel — Jeremy Cates of Cutler and Elijah Brice of Eastport — paint a picture of Downeast fishermen coming full circle, returning to a seasonal calendar of employment that naturally diversifies income sources. Cates recalled the income diversity that existed for generations before lobster became the dominant fishery.

“When I was a kid watching my Dad, fishing was not something you did exclusively, it was just a part of your local income,” said Cates. “My Dad used to seine for herring, cut wood, lobster fish and build boats, and it was all cyclical and seasonal. I remember distinctly when that changed for me.”

“[The kelp] helps
pay for bait and fuel
costs at the beginning
of the season.”
– Elijah Brice,
fisherman

On one of Cates’ early trips as an adult fisherman in 1998, he found his traps so laden with lobsters he had to stand on the roof of his boat and call for help. “For me, that was the beginning of what became across-the-board change,” said Cates. “All of a sudden… you fished year round, took your traps up at the end of January, and worked on them as fast as you could to get going again. That continued for me until just a few years ago.”

By contrast, in 2019 Cates didn’t put his traps in until late April, and said he didn’t turn a profit until August. “And then by Christmas it’s just about over. Some things have changed in the fishery for sure,” he said.

“I was applauding Elijah for finding new opportunities and expanding his horizons, because the days of making lobster fishing your only job are probably past,” said Cates. “And unless that circles back around for some reason, I would say that [Elijah’s model] is the future.”

Panelist Elijah Brice is a senior at Shead High School in Eastport, and at the age of 17 has already been working on the water for five years. Today he splits his time between fishing, boatmaking, and aquaculture.

“I’ve only been fishing for a limited time, but in that short period no season has been the same for me, they’ve all been vastly different and super spotty,” said Brice. “What I’ve really learned is that you can’t place all your bets on it.”

In addition to his work building boats designed by Easport’s George Harris, Brice grows sugar kelp on two Limited Purpose Aquaculture leases in Cobscook Bay, seeding the kelp around December and harvesting around April. The sale of that kelp provides a key part of his seasonal income.

“[The kelp] helps pay for bait and fuel costs at the beginning of the season,” said Brice. “It helps propel you through the early parts of the season to get to where the fishing picks up.”

Within those leases, Brice is working with Beals Island’s Downeast Institute to test the viability of a new strain of mussel. Panelist and DEI Executive Director Diane Tilton said they’re testing a selectively-bred mussel variety that has a different meat-to-shell ratio and grows more quickly than wild mussels.

“That’s one of the reasons there’s no shellfish aquaculture in Washington County right now, because they grow so slowly, you can’t make any money at it,” said Tilton. “We’re doing a larger-scale trial in 2020, but there are pretty exciting results so far.” DEI is a member of the Downeast Fisheries Partnership.

“The key to sustaining fisheries is diversity, whether it’s you personally diversifying your income, or it’s a community having a bunch of different fisheries that people are working in,” said Tilton.

“That’s one of the reasons
there’s no shellfish
aquaculture in Washington
County right now,
because they grow so
slowly, you can’t make
any money at it.”
– Dianne Tilton, DEI

Though tensions between wild fisheries and aquaculture exist in many quadrants, Brice said he is not fazed by sharing bottom with aquaculture farms.

“I’ve grown up fishing around the salmon pens in Cobscook, and I’ve just learned to fish around them. You’ve got to work with them,” said Brice. “I haven’t had any issues.”

Panelist Chris Barlett of Maine Sea Grant expressed cautious optimism for the return of haddock and cod. He recalled the early 2000s, when he would tag 50-75 cod a day. “Much like the rest of the coast of Maine we lost those fisheries almost overnight,” said Barlett. “We couldn’t even find juvenile cod by hook and line.” Every year, Bartlett goes out to fish the spots he was shown by older handline fishermen, looking for cod and haddock.

“The numbers this summer were a bit optimistic, because we’re starting to see some juvenile cod again. We’ve heard from fishermen out of Eastport that they’re picking up a few haddock in their traps,” said Barlett. “There is some optimism that perhaps not fishing on our broodstock spawning grounds over the last several years has allowed the population to come back.” Bartlett is also encouraged by renewed interest in restoring a thriving river herring fishery.

After the event, Wood said he was struck by the positive support for how fisheries are managed in Maine.

“We hear so much talk about the role that management plays, and how they don’t always get it right,” said Wood. ‘That wasn’t the story we heard from our experts. Everyone understands that it’s a difficult job. It was good to hear people understand that.” Wood was also encouraged to see Downeast lobstermen making plans to handle whatever might come.

“This meteoric rise we’ve had in the lobster fishery will at least flatten out, if not decline to what had been normal in the past. So the fishermen — especially the young folks like Elijah — have to think about how to be resilient and adaptive in that context,” said Wood. “The lobstermen of Washington County are definitely looking to the future.”