BEALS — Downeast Institute, in partnership with Blue Hill Bay Mussels, has found a solution, the Beals-based organization says, to weaning the state’s Maine mussel farmers from being fully reliant on wild seed and wild seed capture to produce their mussels.

“Some years that works out well and you’re left with a bounty, some years you’re left wanting, and that leaves a lot of risk in your business,” Downeast Institute production manager Kyle Pepperman said during a successful pitch for a $12,000 funding opportunity from the Maine Sea Grant’s Buoy Maine pitch event through the University of Maine. 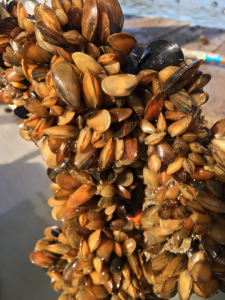 “So there’s an enormous amount of room for expansion in this market,” noted Pepperman. “But […] we’re worried that the reliance on natural seed collection will act as a bottleneck for expansion.”

In crafting a solution to the problem, the Downeast Institute created hatchery technology to develop hundreds of millions of blue mussels annually in a sustainable and economic manner.

“We’ve increased capacity to seed not only [the Blue Hill Bay Mussels] farm, but also to offer seed to mussel farmers all over the state of Maine,” he said.

In an effort to stand out and create even more demand for the Downeast Institute mussels, however, Pepperman and his team went a step further by turning the blue mussels into gold mussels.

“We didn’t want them to look like the mussels that everyone else was producing,” Pepperman noted in the pitch. “So we decided to select a gold stripe phenotype of physical characteristics and through selective breeding, we’ve been able to amplify that so that now over 90% of our product comes out with this absolutely stunning appearance.”

Mussels with this appearance can be found in nature but are rare in comparison to the quote-unquote normal blue mussels that we see on our seashore, Pepperman wrote in an email to PenBayPilot.com.

“We bred these golden colored mussels together and selected the best looking, and fastest growing, offspring to use for our next generation of parents,” Pepperman said. “This process is repeated over and over to produce a line of animals that are born nearly 90% gold. The golden color is inherent in the outer layer of shell called the periostricum.”

The process, which yields mussels ready for consumption in as little as 18 months, is not new, Pepperman noted.

“Humans have used these same techniques since the start of agriculture,” he said in his email. “Think of the difference between a Rhode Island Red chicken and a Plymouth Barred Rock chicken. They are the same species but they have a different phenotype that has been selected by the farmer/scientist who produced the animals.”

“One thing that sets our mussels apart, besides the color, is the fact that our mussels are truly sustainably produced,” he said. “We didn’t have to take baby mussels away from the wild to produce this product, which makes it a one of a kind Maine mussel.”

Pepperman, in the funding pitch, touted Blue Hill Bay Mussels will harvest more than 100,000 pounds of the gold mussels this year, and the plan is to place the gold mussels on dinner plates around the continent.

In an ideal world, Pepperman acknowledged Downeast Institute would cater to every mussel farmer in the state of Maine who wished to grow its mussels. He admitted, however, the limitations imposed by the size of its hatchery will only allow the needs of Blue Hill Bay and possibly one other farm.

“We plan to continually scale up our operation to meet the needs of the industry but it is likely that another Maine hatchery will rise to meet the demand,” Pepperman said. “Part of our business model is to only sell our special ‘golden’ seed to Maine farmers and keep this unique bivalve as a one of a kind Maine product.”