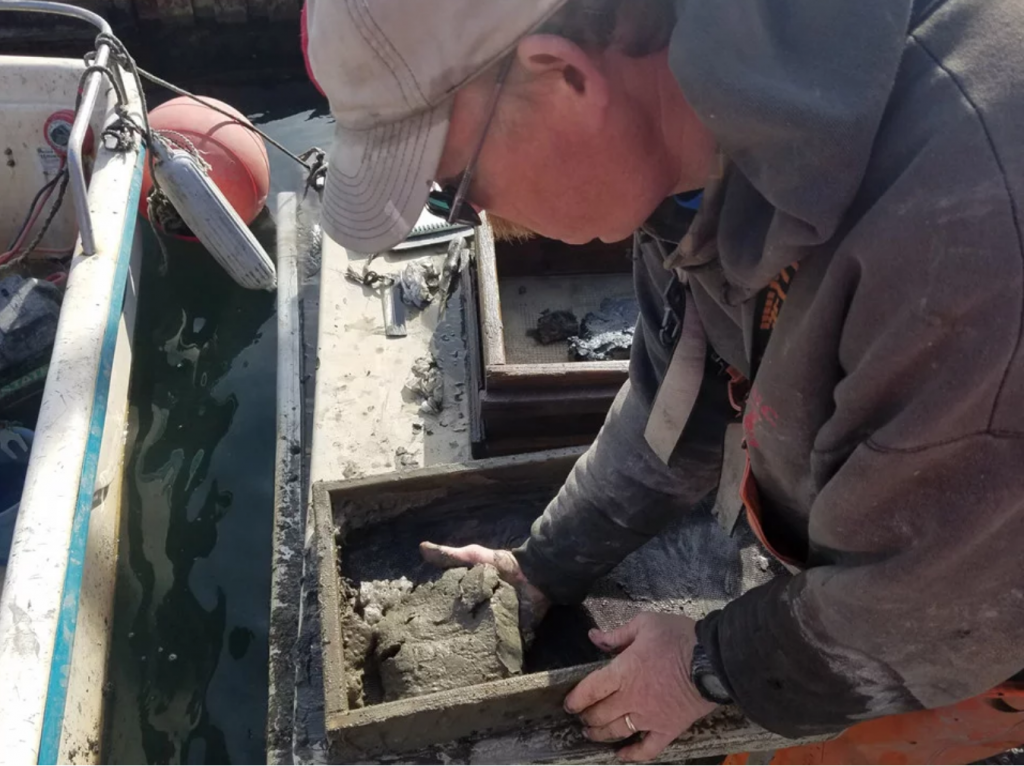 Brian Beal, the director of research at the Downeast Institute, scoops sediment out of a clam recruitment box as part of a five-month-long study to test the effects of clamming techniques. Photo courtesy of DEI.

HARPSWELL — After a five-month study in Harpswell, Bremen and Goudsboro, researchers concluded decades-old clamming practices thought to increase clam populations are generally ineffective because of predators.

Brian Beal, the director of research at the Downeast Institute, a marine research laboratory and education center, studied how brushing — a technique involving inserting tree branches into mudflats to slow currents so baby clams can grow — affects clam populations.

“What may have worked in the 1950s is not effective today,” said Beal. “Towns are spending time and energy brushing … but continuing makes very little sense.”

Green crabs, an invasive species, are known for eating soft-shell clams, baby lobsters and destroying eelgrass, underwater vegetation that serves as a habitat and prevents erosion. Beal said the warming ocean, particularly in the Gulf of Maine, facilitates the growing population of green crabs, as they prefer warmer water.

“If we continue to get mild winters, we can almost guarantee green crabs are having a good chance of surviving,” said Beal. “Green crabs have adapted to Maine’s cold water, but no predator has evolved that can control green crabs.”

The green crab population grew exponentially in the 1950s, subsided, then reappeared with a vengeance in 2012. They’ve been an issue for fishermen ever since. During its three-year life cycle, a single green crab can leave behind 370,000 offspring.

David Wilson, Chairman of Harpswell’s Marine Resources Committee, agreed green crabs wreak havoc on the town’s soft-shell clam population, but added milky ribbon worms are an equal threat, especially because they can sneak through netting. The worms enter the clamshells, eating the meat inside. The worms do more harm to the soft-shell clams because they’re unable to completely close their shells, unlike hard-shell clams.

To help clam sales, Beal suggested lowering Maine’s shellfish law that states, “A person may not possess soft-shelled clam shell stock whose shells are less than 2 inches in the largest diameter.”

Beal said he would like to see it lowered to 1.5 inches, which would give clammers access to more clams without harming the soft-shelled clam population. He said he believes there’s, “No biological reasoning” for the size law because, “There’s no correlation between age and eggs in shellfish…As size increases, the number of eggs grows exponentially.”

Wilson said he didn’t know how such a change would affect the clam population, but agreed it would allow clammers to sell more soft-shelled clams.