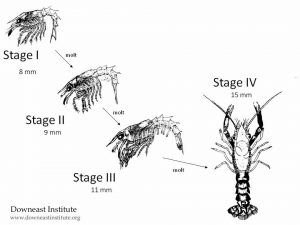 We conducted a series of five laboratory experiments (7-18 days in duration) to test the interactive effects of stocking density, aeration rates, and food types on survival of American lobster (Homarus americanus) larvae through their first three planktonic stages (I-III) to the postlarval stage (IV). 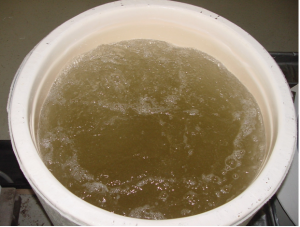 Experimental units and culture protocols were designed to replicate a 1:100 scaled-down version of equipment used in association with a fishermen-sponsored, stock enhancement lobster hatchery located in Cutler, Maine.

The results from the first four trials revealed that extremely high rates of aeration [ca. 240 mL air sec super(-1)] were necessary to distribute larvae and food sufficiently to reduce cannibalistic encounters; however, the best survival from stage I-IV [at stocking densities of 7-26 L super(-1) fed ad libitum with enriched Artemia] was only 24%. The final experiment [stocking density = 20 L super(-1)] yielded a mean survival rate (plus or minus 95% CI) of 75.8 plus or minus 10.2% (range = 62.7% to 90.7%; n = 6).

One important difference between the last and first four experiments was how stage I larvae were managed prior to their culture. In the first four trials, unfed larvae were collected from a relatively small (46 cm x 30 cm x 20 cm), screened capture basket located near the discharge pipe of a broodstock holding tank at the hatchery where they may have resided for > 12 hr. Larvae used in the final laboratory experiment were collected directly from the broodstock tank within 30 min after being liberated from the mother’s swimmerets. 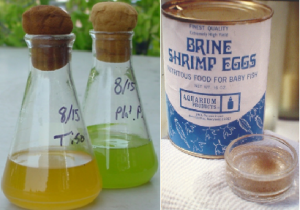 A combination of algae and brine shrimp was used to feed the lobsters.

Larvae, at relatively high densities within the screened box, likely had many more cannibalistic encounters prior to their culture than those collected directly from the broodstock tank and, therefore, suffered high rates of mortality during the first four laboratory trials.

Mass rearing methods for larval American lobsters developed in conjunction with these laboratory experiments were used successfully by staff at the Cutler Marine Hatchery from 1988 to 1992.